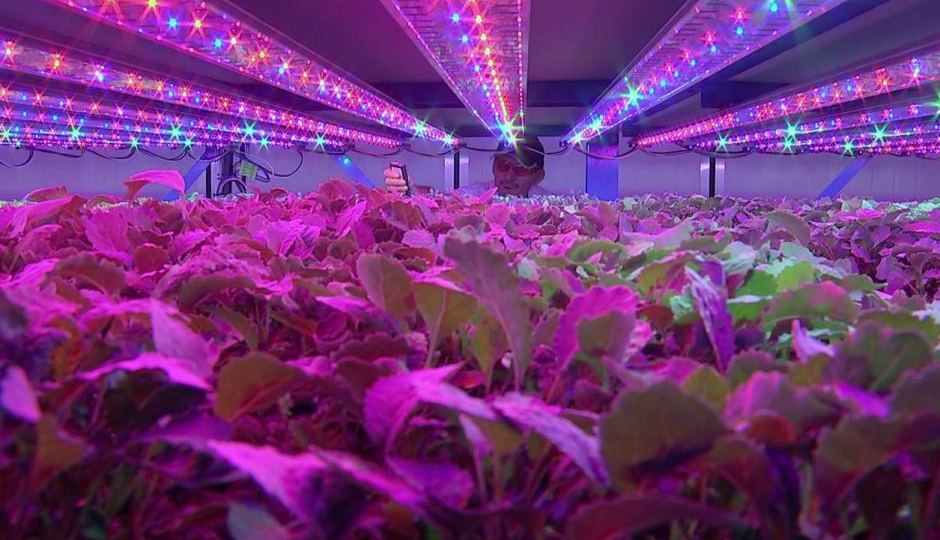 Two regional Queenslanders behind a hi-tech invention for growing green produce in industrial settings are taking their vertical farm system to the world.

Vertical farming is a way of producing food or crops stacked on top of one another, in an indoor environment. It is challenging the way people think about producing food.

Ashley Thompson and John Leslie together spent almost 10 years tinkering on their technology.

Their business, Vertical Farm Systems, is run out of a warehouse facility near the regional township of Yandina, on the Sunshine Coast.

“We basically go from seed to harvest of green, leafy vegetables, salad greens, herbs, inside about a 28-day period,” Mr Thompson said.

“We grow in an evacuated clay medium where we put that into the climate cells. That’s where the nutrition, the lighting, the climate control is all undertaken to make sure that that plant has the best environment for growing.

“We had to engineer and design the whole system and make sure that it’s structurally correct and functionally correct,” Mr Leslie added.

“Then [we had to go] looking for suppliers around the world — unfortunately there is no vertical farm shop, yet — but we had to then start finding suppliers and get a lot of tooling made for injection moulding, casting and extruding and now we have 43 suppliers globally that provide all our components for us.”

With just the click of a mouse, the entire harvest and planting process is able to be set in motion.

First, seeds are planted via an automatic seeder, directly into clay pebbles.

Then they’re watered with an organic germination accelerant, before being transported down the line to their new home for the next month, inside a ‘climate cell’.

“That can vary over a 24-hour period. Then, at the end of the 28 days, we remove the cell, remove the growing tray automatically and lower it down onto the transport rails and automatically harvest it.

“Then the bench is washed and sterilised, the clay pebbles are recovered and put back into the growing tray and the whole cycle starts again” he said.

A system with three climate cells can produce about 500 kilograms of cut, leafy green products per week, 52 weeks a year.

It has been used to grow a range of crops, including basil, lettuce, rocket, spinach, bok choy, pak choy, endives, chard and more.

Mr Leslie says the idea for the invention was initially borne out of a desire to help needy countries.

“The dream of feeding the world has certainly been a driver. But the realities of the market and the cost of growing in a controlled environment system has a higher premium,” he said.

“The third world, where there’s the greatest demand for food, isn’t equipped with the economic income or means to be able to afford that kind of food.”

At that price range, the men are more realistic about the market for their technology; targeting people less concerned about the price of food, and more interested in quality, freshness and food miles.

“At the moment Canada, for example, is importing up to 95 per cent of its salad greens from South America or California. There’s no reason they can’t grow them locally with this technology.”

They plan to export the machinery overseas, install it, commission it, and stay on for 28 days to ensure the first successful crop.

“We’ll export the whole system, then we’ll actually install it, and we’ll commission it and we’ll stay there for their first crop,” Mr Thompson said.

In the meantime, they’re also hoping to find markets at home.

“At the moment we’re just selling out of the farm shop. We just threw the door up,” he said.

“We’re wanting to start the discussion about the quality of food that can be produced in this sort of environment.

“To do that you need to let people see it, touch it, feel it, and actually experience what it looks like in a farm like this.”