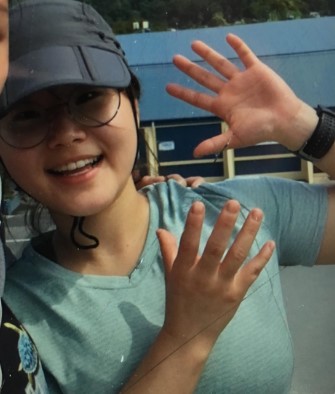 Dreams of a warm bed and cravings for mee goreng kept Joohee Han hopeful she would be rescued in the near-week she spent lost in bushland in far north Queensland.

The Korean backpacker slipped while descending the treacherous Mount Tyson track at Tully during a solo hike on Friday, June 1, and was knocked unconscious for several hours.

It was dark by the time the 25-year-old woke up in a narrow ravine next to a waterfall, and she remained there for six days, unable to go anywhere.

Speaking in Korean with ABC, Ms Han described her fear of dying alone in the bush.

“I pretty much didn’t move from where I fell from because it was so steep. Even putting a foot wrong would’ve been instant death,” she said.

“It still makes me teary thinking about that, thinking, ‘Am I going to die?’ But there was so much I still wanted to do, food I wanted to eat, and people I wanted to see again.

“I wanted to give up hope but there was so much I still wanted to do, so I think I just kept thinking I wanted to survive.

“I thought of my parents so much.”

Despite the fall, Ms Han’s only injuries were a broken tooth, bruises and some minor grazes.

“I can’t remember feeling pain or even actually slipping. I just woke up and I was lying there,” she said.

Being stranded by a waterfall meant the 145cm-tall banana farm worker from Seoul had access to drinking water, but the spray made her clothes and shoes damp and she feared she would die from the cold, with overnight temperatures dropping to 9 degrees Celsius.

“I would get so happy when the sun would come up, being so cold, and then to have the warmth of the sun,” she said.

“I think by the end I wasn’t even waiting to be rescued, I was just waiting for the sun to come back up.

“I thought if I died, it wouldn’t be from dehydration or hunger or being scared, it would be from the cold.”

Ms Han was reported missing five days after her disappearance due to friends at her Tully hostel believing she had gone to Cairns for the weekend.

An extensive air and land search only began on Wednesday.

Ms Han said she thought a lot about all the things she would do if she made it out alive.

“I just wanted to lie in a bed. Just the basic stuff. Having a blanket when I’m cold, getting into bed when I’m tired, eating food when I’m hungry. Just the bare necessities,” she said.

“I thought so much about the things I wanted to do when I got out of here and stepped on solid ground, but then I’d get sad again because I knew I could only do those things if I stayed alive. They were things I couldn’t do if I died.”

A team of police and soldiers reached the summit then thrashed through rugged bushland for two hours before finding Ms Han just after midday on Thursday.

“I was drinking at the waterfall when I heard someone. I said, ‘I’m here!’ and they said the helicopter was coming,” she said.

“I asked them for food so they threw me their bag so I had two pieces of bread.

Ms Han said she was crying and could only keep repeating “thank you” to her rescuers because of her limited English.

“I didn’t realise how happy I could be just standing on the ground until then,” she said.

She was flown to Tully Hospital where her friends brought her some Coca-Cola and bananas.

‘If they hadn’t reported me missing, I’d be dead’

She plans to visit Korea in a week to see her family and fix her broken front tooth, but wants to come back to live in Australia.

“Australia is so pretty. The people are lovely. The air is so clean. The nature is so beautiful. Just being in Australia makes me so happy,” she said.

“While I was up there, I was thinking I’m finally living in a place that makes me so happy, so I was so sad to be in my predicament.

“I want to stay in Tully because I like it so much, but I’ve become so famous that I feel I couldn’t live here, even though I want to so much. I’m worried people will applaud me on the street when I just want to live here quietly.”

Ms Han’s hostel friends are planning celebrations for when she is discharged from hospital on Sunday, but she said she did not want a party, just a chance to say thank you.

“If those friends hadn’t reported me missing, I would be dead, so I want to thank them and the people who worried about me. I just want to tell people, thank you and sorry.

“I don’t feel I deserve celebrations. I just want to thank everyone.”

Ms Han said she reflected on life differently after her ordeal.

“I was thinking about this a lot up there. I’ve been given another chance to live,” she said.

“It’s just those trivial things, no extravagant plans or anything. I just want to live being grateful for each of those little things, being able to wake up and have a shower, see my friends’ faces, my family, being able to study, read, run, travel wherever I want to.

“I’m so, so happy to have been given the chance to live that way.”