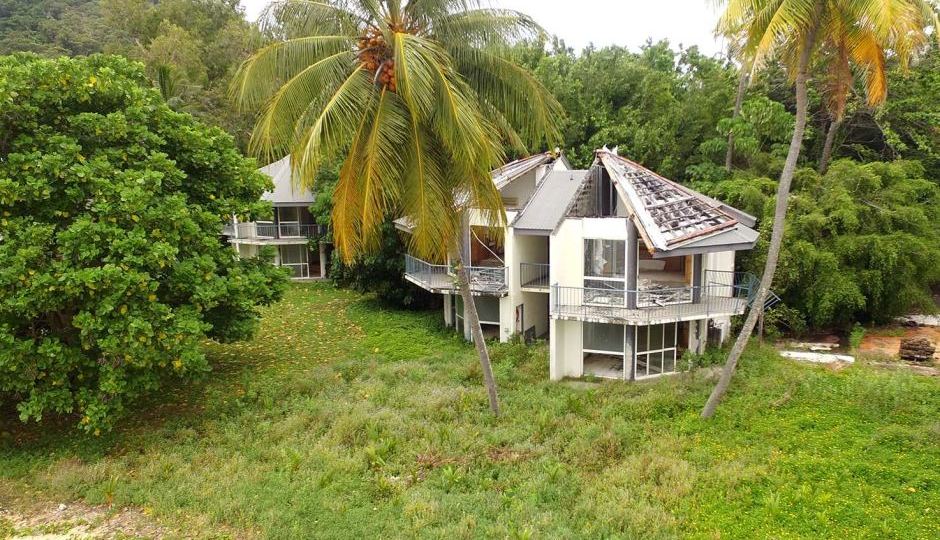 A once internationally famous resort in far north Queensland now languishes in ruins and is a waste of potential, frustrated locals say.

Dunk Island was viewed as a jewel in Queensland tourism’s crown, but unrepaired damage dating back to Cyclone Yasi in 2011 has left it as a diamond in the rough at best.

Locals hope that may be about to change, at least partly, with the island’s spit and camping grounds up for tender.

After being destroyed twice over by cyclones Yasi and Larry, the Dunk Island Resort was bought cheaply by Linc Energy founder Peter Bond in 2012.

The resort is now under the control of his son Adam Bond.

Years later, the resort remains closed to the public, with much of it looking as if the storm blew through yesterday.

“It’s a bit of an eyesore, but on the flipside you can explain to people where we’ve come from. This is the category five storm that we had and that’s what it did to this whole region,” Nancy Lowe, who runs a water taxi service to Dunk Island, said.

The resort is on privately owned land, but the neighbouring spit is part of the island’s national park, with a sub-lease managed by the Cassowary Coast Regional Council.

Until November, the lease on the spit was held by the Dunk Island Resort, and upon its expiry the council put it up for public tender.

Mayor John Kremastos said the council would be looking for something unique for the spit.

“It is iconic in north Queensland and we want to do that island justice,” Cr Kremastos said.

“It isn’t the most attractive at the moment, we acknowledge that, but we are in a transition period.”

Peter Bond and Dunk Island Resort did not respond to the ABC’s requests for comment.

Dunk Island is just 20 minutes by boat from Mission Beach, south of Cairns.

Real estate agent Di Wagner said she visited the Dunk Island Spit recently for a picnic, and was surprised to find it virtually empty.

“When we went up to use the amenities we found them in a really poor state … leaves and sand had all blown in and it just looked a bit deserted,” she said.

“It’s not very inviting for tourists.”

“We really do need Dunk Island to be up and running again in full strength rather than the way it is now,” Ms Wagner said.

“There are a lot of empty commercial shops in Mission Beach, so not everyone has coped.”

Ms Lowe said businesses suffered after Cyclone Yasi and had to adapt.

“Five years ago it was pretty dismal, but the town’s evolving,” Ms Lowe said.

‘A bit of a disgrace’

While many in Mission Beach are keen to see a reinvigorated spit and reopened resort, others want to ensure the natural environment is respected.

Liz Gallie from the Cassowary Coast Alliance said there had been a lack of respect for the island from both the resort owners and the council.

“It was sold for such a low price and the present owners haven’t done anything with it, it certainly hasn’t been fixed up,” Ms Gallie said.

“It’s just a bit of a disgrace, there’s horse poo all over the beaches … it’s not managed the way a national park area should be managed.”

“If the government is going to allow private leases in our national parks then we can see that it is quite likely that this will be the end result. The track record isn’t that good.”

A state government spokesman said the government would prefer the Dunk Island Resort remained open to the public, but said “this is ultimately a matter for the freehold owner to address”.