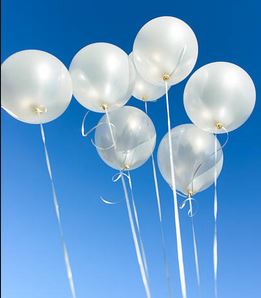 Releasing balloons into the environment can attract fines of up to $250. Photo: AAP

Families planning to release balloons at funerals and memorials for loved ones are being asked to consider alternatives by Keep Queensland Beautiful.

The environment conservation group will be writing to all funeral directors throughout Queensland this month, asking them to carry pamphlets reminding customers that releasing balloons into the environment is harmful to wildlife, is considered littering, and can attract fines upwards of $250.

It comes off the back of a viral Facebook post from the group late last month, which attracted more than 10,000 shares and thousands of comments.

You could be forgiven for thinking this was a recent change in Queensland, but it’s not.

To not retrieve balloons released into the environment is classified as littering, which has been against the law in Queensland since 2011.

So why all the discussion?

It started last month when Queensland’s Environment and Science Department updated its website with information specific to the release of balloons.

Keep Queensland Beautiful CEO David Curtin said it was the perfect opportunity for them to raise awareness with the public.

They are now turning their attention to Queensland’s funeral directors.

“It’s one of those emotive subjects because a lot of people let go of helium balloons at funerals and memorials,” he said.

“It’s an emotive thing and it’s been touchy, so we’re glad the government’s come out and say it’s illegal.”

Mr Curtin said they have already met with White Lady Funerals, which has 11 funeral homes around Brisbane, the Gold Coast, the Sunshine Coast, and Cairns, about the issue.

“White Ladies don’t prepare those balloons or offer them as part of the service. It’s up to the families to put that stuff together, but they will pass on our brochure,” he said.

“We’ll be writing to all other funeral directors throughout Queensland to make sure they’re all aware.”

No fines issued over release of balloons

Balloons themselves are not banned, it is when they are released and leave the person’s property they constitute illegal litter, under the Waste Reduction and Recycling Act 2011.

A Department of Environment and Science spokesman said the negative impacts of balloon litter to the environment were well documented, as well as the negative effects on wildlife.

“Because of this, the department has not had to issue any penalty infringement notices, or fines, regarding balloon releases, however warning letters have been issued,” the spokesman said.

“The department has in the past acted upon advice received and contacted various groups advising them of suitable alternatives to releasing balloons. These groups have all chosen to not release balloons.

“For example, in one circumstance a high school that wished to celebrate the end of the school year by releasing balloons elected to do so within its gymnasium so the balloons could be retrieved.”

The spokesman said the law does now differentiate between different types of littered material and whether the waste is biodegradable or not.

Grieving families asked not to release balloons at funerals