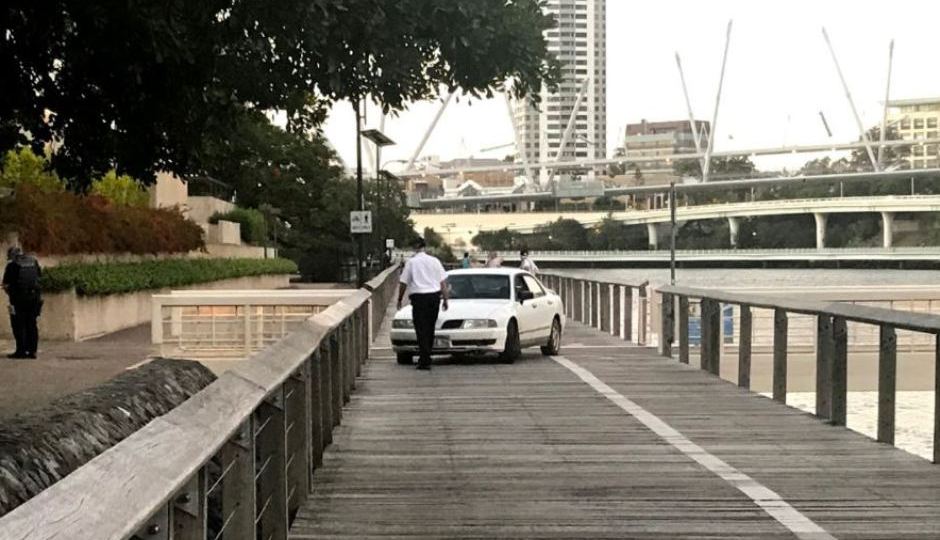 It's unclear how the car got onto the boardwalk. Photo: ABC

Surveillance camera footage has been released showing the moment police stopped an allegedly drunk and unlicensed woman driving down a busy bike and pedestrian boardwalk.

The woman drove down the wooden boardwalk, which runs along the Brisbane river, for nearly 300 metres.

The vision shows her passing cyclists and pedestrians before coming to a stop in front of officers.

Police officers then talk to the woman, who allegedly returned a blood alcohol reading of 0.153.

“They acted very quickly to intercept a threat that could have had some tragic consequences,” he said.

A security analyst says the fact the car was able to drive so far along the pedestrian boardwalk highlights a security flaw.

Minister Mark Ryan said Queensland Police have been working closely with the Brisbane City Council to review safety risks in public spaces such as South Bank.

“Our police are ahead of the game when it comes to the constant review of safety and security for those public spaces,” he said.

“They’ve been doing it for a long time.

“The police will continue to work with local governments to ensure that we conduct the appropriate safety audits. And where additional steps are needed, those steps are taken.”

Police said the woman had driven from Atkinsons Dam, which is about an hour west from Brisbane before the incident.

She is due in the Brisbane Magistrates Court in February facing charges of drink driving, driving without a licence and driving an unregistered vehicle.