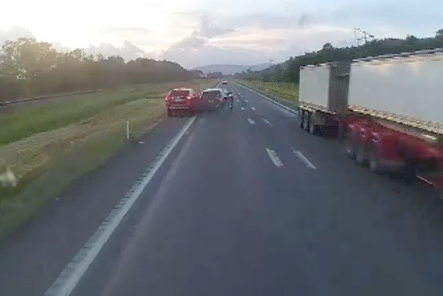 Dashcam footage shows a stolen car crashing into another vehicle on Bruce Highway.

The dashcam footage from December 22 shows a Holden Cruze, which police allege was stolen, overtaking a Toyota Kluger on the Bruce Highway near Coolbie.

An allegedly stolen Mitsubishi Challenger appears to attempt the same, but narrowly avoids an oncoming semi-trailer.

It then hits the Kluger sending it off the road where it rolls repeatedly.

Police have released dashcam vision of an alleged stolen vehicle involved in a serious high speed traffic crash near Coolbie on December 22. Two teenagers have been charged in relation to the incident, anyone with further information is urged to come forward. pic.twitter.com/1nUXCPAYeg

Police said the three people in the Kluger, all aged in their late 60s and early 70s, were trapped in the car for some time.

They were later taken to hospital with serious injuries including cuts and fractures.

Police said the driver of the Cruze returned to pick up the occupants of the Challenger before fleeing the scene.

A 16-year-old Annandale girl and a 16-year-old boy from Garbutt who police allege were driving the stolen cars were arrested a couple of days later.

The female teen has been charged with a number of offences including aiding a person to escape from lawful custody, burglary, and serious assault police.

The male teen was charged with driving without a licence, burglary, stealing, and dangerous operation of a motor vehicle.

Police have urged anyone with information about the crash to come forward.