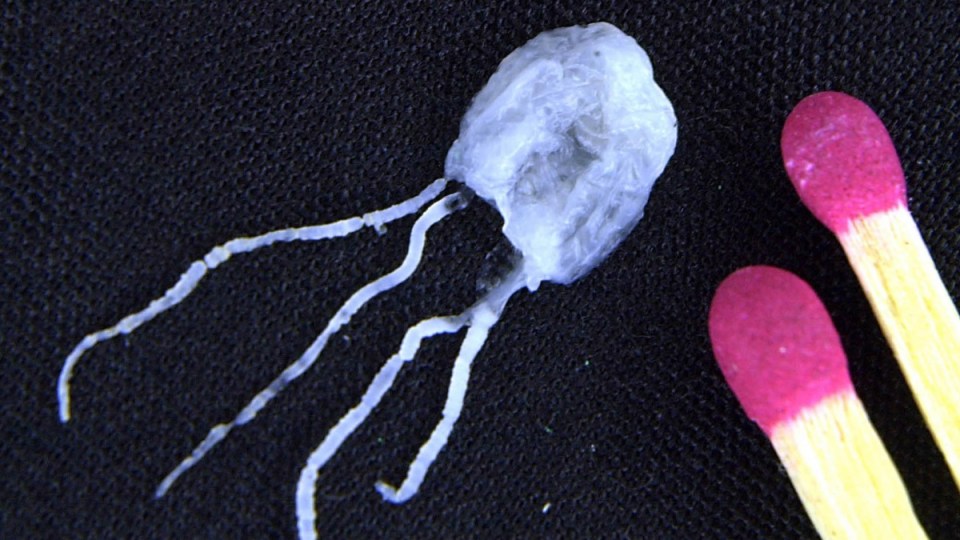 The Irukandji jellyfish is tiny and potentially lethal. Photo: AAP

The deadly Irukandji jellyfish is on the move south, offering further evidence Queensland’s famous beaches are firmly on the front line of climate change risk.

An Irukandji jellyfish has been found off the coast of Fraser Island for the second time in two years, prompting renewed fears warming waters will eventually see the deadly creature reach the Sunshine Coast.

It comes after a summer dominated by coral bleaching, a virulent Crown of Thorn outbreak on Swain Reefs off Yeppoon and this week’s horrific research indicating north Barrier Reef green turtle populations are at risk of collapse.

The Irukandji jellyfish danger prompted lifeguards to drag the beaches on the island’s west coast on Sunday.

There have been 10 suspected Irukandji stings on the western side of Fraser Island between December 22, 2016, and January 5 last year.

James Cook University professor Jamie Seymour said much was still unknown about the number and types of the Irukandji species on the Queensland coast.

“There’s not a huge chance of being stung, however there are specific places along the east coast of Australia and Queensland that you definitely do not want to swim because that’s where you’re going to get stung,” he said.

“The length of the season has increased from one to two months to almost six months,” he said.

It’s only a matter of time before they get from the southern end of Fraser Island to the Sunshine Coast and that’s when things will get interesting.”

Water sampling by researchers has shown the move south appears to be corresponding to the rising sea temperatures.

“We’ve seen a one to two degree temperature rise in the water off the coast in the southern side here and the animals have moved predictably with that,” Professor Seymour said.

Swimming on Fraser Island: take vinegar with you

Professor Seymour has described a sting from an Irukandji jellyfish as overwhelming.

“There’s usually severe vomiting, nausea, stomach cramps and about 10 to 15 per cent of patients end up with cardiac problems. Linked with that is this feeling of impending doom where everything is going to go wrong and there’s nothing you can do to fix it.”

“We’re urging everyone to stay out of the water entirely on that western side of the island while conditions are hot and humid,” he said.

“If anyone is stung on Fraser Island they should douse the area with vinegar as soon as possible and immediately call triple-0 to seek emergency medical assistance.

“We don’t want to cause widespread panic, but it is really important for people to exercise caution and put safety first at all times. This includes taking a bottle of vinegar with you if you are heading to the island, to be prepared to treat a sting.”

Mr Holden said SLSQ would continue to conduct daily stinger drags on the western side of Fraser Island, while informing campers and beachgoers in the area on the risks associated on entering the water and handing out marine stinger treatment information.