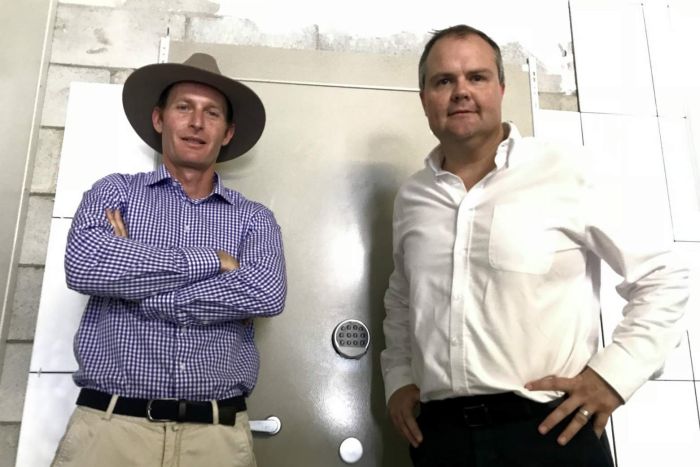 Adam Benjamin and Ted O'Brien in front of one of two vaults where the medicinal cannabis will be stored. Photo: ABC

The medical marijuana industry has been identified as an Australian business growth story as Queensland’s first licensed cannabis farm prepares to receive its ‘mother’ plants in the next five weeks.

The plants are to be imported to the Sunshine Coast from Israel and manufacturing of enough medicine to supply 5000 patients is due to begin within six months.

Last week, federal Health Minister Greg Hunt announced changes to regulations that would allow for medicinal cannabis exports, capitalising on what the government estimated would be a $70 billion industry by 2025.

The federal government has also approved the sale of medicinal marijuana, but prescriptions for the product will be strict.

That mindset is also clear in the secrecy and high security that surrounds the new multi-million-dollar facility run by a company called Medifarm.

Journalists taken on a tour of the site were asked to sign a non-disclosure statement to keep the location of the facility a secret.

“I guess one of the reasons the licensing authority, the Office of Drug Control through federal health, liked what we proposed and awarded our licences is everything’s co-located,” Medifarm director Adam Benjamin said.

“We cultivate, we produce, we manufacture, we bottle and then we distribute onsite, which I think for accountability is very important.

“The licensing authority has the right to knock on our doors any time of the day they like and come and inspect, and the buck stops with us.”

When workers arrive at the Sunshine Coast compound they will be identified by fingerprint scanning, and enter through a steel turnstile.

“They get changed. They then go off to their separate sections, which are again all controlled by biometric fingerprint scanning for access,” Mr Benjamin said.

Federal member for Fairfax Ted O’Brien said strict controls of the supply chain would be critical to the government’s aspirations to make Australia the No.1 world player in medicinal cannabis.

“We need to get approvals. The Global Narcotics Control Board has given a big tick to the framework that’s being adopted in Australia,” Mr O’Brien said.

“That can only stay if we have the players who manufacture this product doing exactly what Medifarm is doing.

It’s about building a new industry and that’s why it’s so critical that this company and others comply.

“A lot of the countries that are currently active are exploring the opportunity of imports but also exports themselves. You’ve got multiple states, particularly in the US that are very active. Canada’s coming on stream.”

Medifarm is one of just four licensed medicinal cannabis farms to gain approval in Australia.

The company has an exclusive international intellectual property partnership with Israeli-based company Tikun Olam, which pioneered world production 12 years ago.

“Ninety-five per cent of the medicines that we produce have no psychoactive ingredients, so although security measures are in place, we’re not talking about what people normally would come and try and take,” Mr Benjamin said.

The schedule eight pharmaceutical medicine has gained federal approval to treat conditions including cancer-related pain, nausea and vomiting, multiple sclerosis and epilepsy, and for use in palliative care.

But bottlenecks remain to doctors prescribing the controversial treatment.

“Everything will be quality tested onsite. We will then validate it off site at the University of the Sunshine Coast,” Mr Benjamin said.

Two large steel vaults have been craned onto the site. One will be used to store the harvested, dried raw product.

“It’s a very heavy steel safe door, and then when it’s needed for extraction purposes it goes through to the laboratory, becomes oil, gets tested and then all the finished product goes off into the second vault door,” he said.

“It’s fire-proofed to what’s called 90-90, which means you can have a blazing inferno outside and nothing inside will get touched for 90 minutes at the very least, which obviously gives you more than enough time to work on anything that may have happened.

“Not just the perimeter security, but also the safety and security onsite is paramount.”

As The New Daily has recently reported, seriously ill patients who are turning to medical cannabis for life-saving treatment are currently being sold fake, poisonous and intoxicating products manufactured in backyard laboratories across Australia.

The unlicensed suppliers are sending cannabis oil that contains dangerous chemicals, and then charging people $6000 for up to three months’ supply.

The unregulated products have potentially put patients’ lives in serious danger with several reports of abuse and the leak of private patients’ details. During a six-month investigation, The New Daily was sent 14 different samples of cannabis extract from concerned customers of three different illegal suppliers.

A top Australian research facility, which did not want to be named, independently tested these products for the amount of cannabidiol (CBD) and tetrahydrocannabinol (THC), the two most active ingredients in the cannabis plant.

When that data was analysed by Safe Work Laboratories, 13 products were found to have no medicinal value, contained hazardous chemicals or were heavily intoxicating.