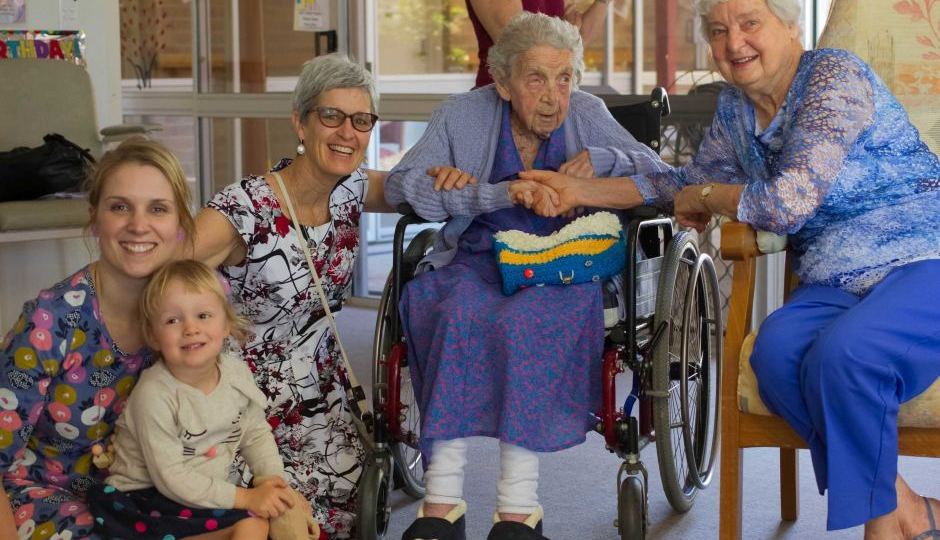 Queensland’s oldest person Phyllis Lee, whose life story reflects the timeline of the state’s history, died on Wednesday morning in Stanthorpe at the age of 110 years and 46 days.

The days matter when one is a supercentenarian, of which there are — were — just three in Australia.

Along the way, Phyllis experienced first-hand some of those events that shaped a nation: two world wars, the Great Depression, the introduction of television, the marvel of refrigeration and the convenience of indoor flushing toilets.

To her extensive family of descendants, she would recount colourful stories of life growing up in country Queensland.

There was the black snake in the rafters at Mungallala, where the family lived in a corrugated iron shed and the school teacher visited town once a month.

And the horse and dray Phyllis would drive, loaded with 44-gallon drums, which she would manually fill from the waterhole to irrigate their orchard at Applethorpe.

While daylight meant working alongside her father and brother among the fruit trees, night was when they graded the fruit by the light of a kerosene lantern.

Christmas was the time when Phyllis would gather her family in her expansive, cosy kitchen in the Granite Belt.

“It was a big family thing to go to the family home [in Stanthorpe] for Christmas,” she said.

“She was central to the celebrations.”

She was born Phyllis Naylor on November 3, 1907 in Doncaster, in the UK.

When she was almost two, her family boarded the steam ship Oswestry Grange at Tilbury Docks on their way to a new life in Queensland.

Their 10-week voyage took them through the Suez Canal, via Colombo, the Torres Strait, Townsville and Rockhampton before arriving in Brisbane in October 1909.

Phyllis’s family believe she may have been Australia’s oldest migrant.

The Naylors moved around the state, from Brisbane to Gympie, Mitchell, Mungallala and Toowoomba before settling on an orchard named Trentholme at Applethorpe.

There was a tennis court nearby where Phyllis developed her passion for a sport she played all her life, and right up to 105 she was still challenging her visitors to games of ping pong.

Life on the Granite Belt

In January 1933, Phyllis married printer Wesley Lee in Stanthorpe, honeymooning in a tent.

The couple began their life in what had been the dormitory of a boys’ boarding school, surrounded by acres of vineyards.

In winter, and when westerly winds blew under the house, the lino upstairs would lift several centimetres off the rickety floorboards.

The house would eventually be carefully taken apart and rebuilt closer to town, becoming — along with a four-oven, coke-burning Aga stove — the core of the Lee family until Phyllis was 98 and moved into care.

“Grandma Lee, as she was known to many, was a robust woman with a Yorkshire heritage,” Ms Elvery said.

Phyllis was an excellent cook, and in the summer would have the entire family around the kitchen table, peeling and chopping up stone fruit for bottling or making jam.

The pantry’s shelves were always heaving under the weight of jars of produce picked from Wesley’s garden and pickled in Phyllis’s kitchen.

The couple had a printery in Stanthorpe, SW Lee and Co, where they printed postcards and government schoolbooks.

They then took on the newsagency and bookstore and also imported fine china.

“She has lived all her adult life in Stanthorpe and had a wonderfully settled life of family and community — church community and town community,” Ms Elvery said.

“There was an abundance of life and food and that’s what made it magical.”

Phyllis claimed “good, clean living” with “no smoking, no drinking, but lots of cups of tea” was her secret to long life.

And she was active, still pulling herself along the corridor rails at the care home in her wheelchair when she was 109.

“Everything is quick with Phyllis,” staff at Carramar Hostel said of her in a 2016 interview.

Grandma Lee, as she was known to her family, leaves more than 100 descendants, the youngest of whom arrived from Denmark just two hours before she died.

Sadly, it was not enough time for the two to meet.