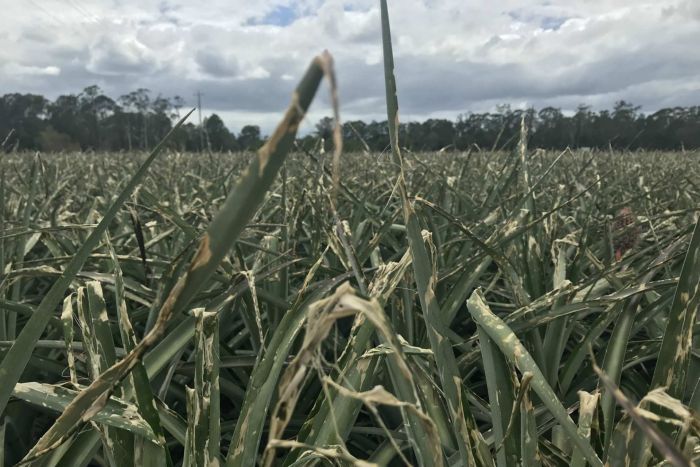 Beerwah pineapple and macadamias farmers fear it could take years to recover from a wild storm that slammed into their properties, battering crops and buildings with cyclonic winds and damaging hail.

Kay Dorman was home alone on Saturday night when the storm hit, tearing apart a machinery and pineapple packing shed and sending missiles of corrugated iron and wood spearing into her home, garage and neighbouring properties.

“There was just an enormous roar and because of the darkness you had no idea of what was actually happening – frightening,” Ms Dorman said.

“I just stayed indoors until it was over. Unbelievable. It’s just flown through, blown the back of the garage out.”

At this time of year Ms Dorman’s son Scott should be planting his next crop but instead faces a daunting clean-up across the family’s 32-hectare property on Old Landsborough Road.

Fellow pineapple grower Murray Pike came to help with the recovery. The Dormans’ fields have been hammered by hail and a hectare of remnant forest was shattered. Mature trees snapped like toothpicks.

“It’s basically ripped the packing shed apart and strewn it over a large area, over the house, and the garage,” Mr Dorman said as he looked at a truck and tractor under the wreckage.

“There must have been a couple of separate cells that came through, one’s obviously come through over the back here and it’s just taken out all this bush in here. You’re looking at probably a hectare of bush that’s never been touched, not a tree left standing.

“These plants here are probably the ones that are going to be more concerning because these are coming up ready for forcing for our crop next year and you can see the damage is very significant and as for the cost of the loss we’ve got no idea.”

Mr Dorman said insurance would cover some of the damage.

“The sheds and houses, they’re all insured but as far as the crops, insurance is available but it’s just financially unviable,” he said.

“You just couldn’t afford the premiums that it would cost to insure the crop so you’ve just got to basically crop it, it’s damaged all the cells of the leaves. They’ve just been stripped basically, like someone’s gone through there with a whipper snipper. You can see they’re just white from the damage from the hail.”

Just down the road Brett and Kirsty Newell’s macadamia farm copped the tail end of the storm.

Tens of thousands of dollars worth of immature nuts will never be harvested from branches that litter the orchard.

“The damage was very variety-specific, some of them coped better than others but in the block that we’re just standing nearby is where we sustained most of the damage,” Mr Newell said.

That’s about three and a half hectares. It’d be in the order of probably 50 to 60 per cent have sustained some sort of damage, major limb damage.”

“Crop-wise I know there’s a lot of nut on the ground and all the branches that we’re dragging out of the orchard, they look like they had a cracker of a crop on them.

“It’s sad but we’re counting our blessings that even though some of the trees have been really badly hit they haven’t been ripped out of the ground, roots and all.”

The Newells’ spirits have been lifted by the care and consideration of fellow growers.

“I’ve had exceptional support from the industry. We had a group of other nut growers here who rallied together around us on Monday,” Mr Newell said.

“We had four tractors going and another seven people on the ground pulling limbs out and hooking chains up for the tractors to tow the stuff away.

“We’re very thankful for the help and support from the macadamia industry, that’s for sure.

“I don’t ever remember a storm like this. Hopefully it’s a once-in-a-lifetime experience.”

Beerwah macadamia and pineapple farmers in shock over storm damage