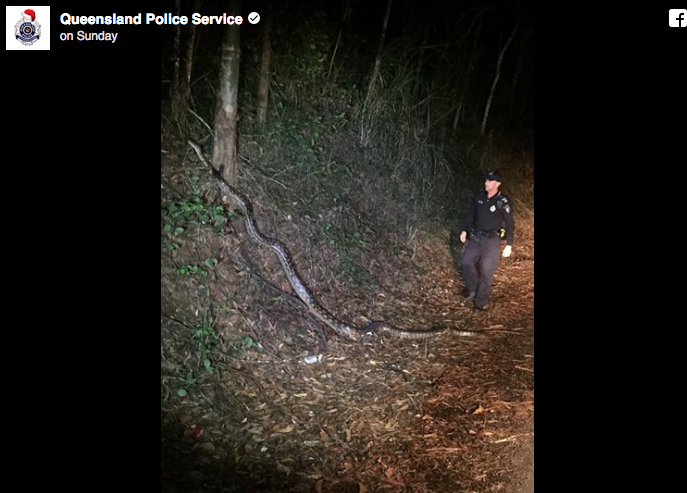 The huge snake was given time to cross the road. Photo: Facebook

A scrub python so long it blocked the road and the path of two Queensland police officers has found fame on social media.

A photograph of the massive amethystine python, discovered during a night patrol by two Queensland Police Service (QPS) officers in the bush surrounding Wujal Wujal, north of Cairns, has gone viral.

It was posted to the QPS Facebook page on Monday afternoon, where it has since been shared more than 13,000 times, and attracted nearly 10,000 comments from people either petrified or in awe of the reptile.

David Walton from Cairns Snake Removals said the officers made the right decision not to handle the five to six-metre snake themselves.

“If they decided they were going to touch it or physically interfere with it, then you’re sort of putting yourself in danger,” he said.

“Certainly if you were to attempt to pick it up or grab it or poke it with a stick they can swing around quite quickly and if he grabs hold of you, you’re in all sorts of trouble.”

Mr Walton said the snake was a rare sight for those in built-up areas, and it was likely to be at the end of its life span.

“I’m always impressed when I see a big snake like that,” he said.

These days we don’t see them getting that big in more of the built-up areas, because it’s pretty easy to get sprung when you’re that big.

“For a snake to be lucky enough to live long enough to get to that size is reasonably rare, because they often get themselves run over or captured or killed.”

Scrub pythons have been known to grow to eight metres in length.

The QPS said two of its officers were not able to get around the python on the road.

“There was no passing in the police vehicle until this scrub python was good and ready to move,” they said.

“Not fond of the police attention, the scrub python made his way quickly off the road so the officers could continue on their way.”