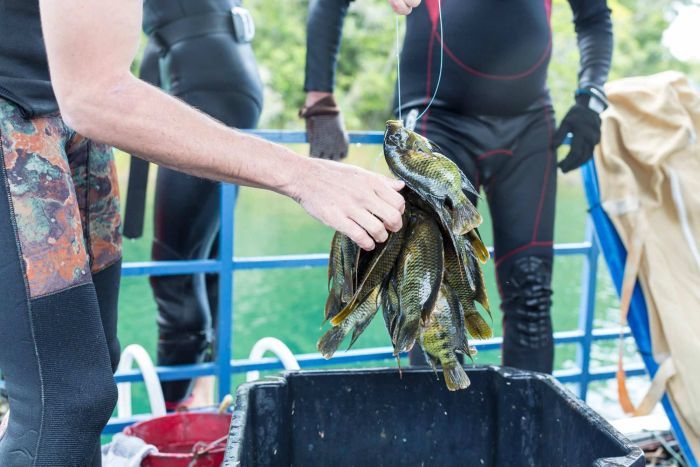 A bucket of tilapia caught by spearfishermen over the weekend. ( Photo: ABC

While the spread of a pest fish in far north Queensland is posing a significant threat to native species, it is giving locals a great excuse to go fishing.

Spotted tilapia were found in the Walsh River, a system which connects to the Gulf of Carpentaria, nearly two months ago and there have been further recent sightings in the Gulf.

The fish are now considered the state’s most problematic aquatic pest species.

The Tablelands community have also been wrestling with a tilapia problem in Lake Barrine for 10 years.

It is unclear how the noxious fish came to be in the popular far north Queensland lake, with only one outlet, but its population has grown significantly due to the tilapia’s ability to breed so quickly and threaten other breeds.

In response, biosecurity authorities, researchers and residents have been spear and line fishing for the noxious pest, with more than 70 kilograms caught by local children over the weekend.
Dr Brendan Ebner from James Cook University said so far the picture was looking pretty grim across the state.

“Unfortunately we’ve just had some confirmed records of them moving into the Gulf country just recently,” he said.

“It’s early days there but it doesn’t look promising.”

Queensland Parks and Wildlife’s Mark Lawson said spearfishing was the most effective way to reduce the population of the pest, with community fishing events held at Lake Barrine since 2012.

“We target [the tilapia] around about three to four times annually if we can, pre and post-breeding seasons,” he said.

Community management efforts in other parts of the region have also ramped up, giving youngsters an opportunity to learn about biodiversity.

An annual kids fishing tournament held in Innisfail claims hundreds of fish from the Warrina Lakes in Innisfail.

“It’s a great way to get in and get the kids having a great effect on our environment,” Cr Baines said.

“It has had quite an impact on the biodiversity, we’re finding that we’re getting native species back in and the competition’s not as strong from the tilapia.”