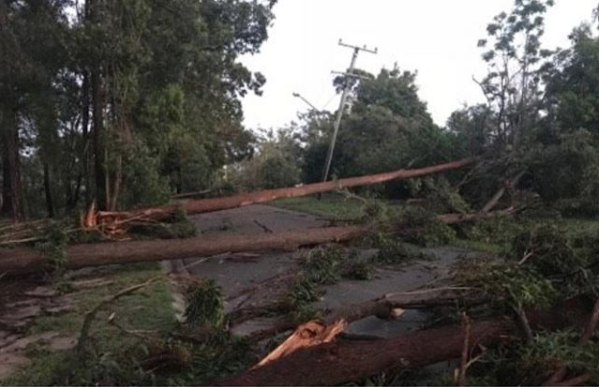 Residents inspect the damage on the Sunshine Coast after a storm tore through southeast Queensland. Photo: Instagram

Australia Zoo was forced to close on Sunday after a severe storm ripped through Queensland’s Sunshine Coast.

Wind gusts of over 100km/h brought down trees and powerlines while more than 100mm of rain fell in one hour on Saturday.

Australia Zoo, owned by the family of late ‘crocodile hunter’ Steve Irwin, said all animals and staff were unharmed in the storm.

“Crikey! We’ve had a RIPPER of a storm at Australia Zoo,” the zoo wrote on Facebook on Sunday, announcing its closure.

“Our gorgeous animals and staff are a-ok.”

Terri Irwin later confirmed the zoo would reopen on Monday after the cleanup, with clearer weather forecast for the coming week.

“The decision to close during the cleanup was not made lightly, however, our guest, animal and staff safety is our priority at all times,” the zoo said in a statement on Sunday.

Footage taken by 7News shows massive trees being carried off, after being uprooted and taken down by the storm.

The Sunshine Coast copped the brunt of the storm, with Bli Bli, northwest of Beerwah where the zoo is located, recording 118mm of rain in one hour, while wind gusts of 113km/h were recorded at Double Island Point.

More than 130,000 lightning strikes hit the region, according to Energex’s lightning tracker.

Nearly 6000 properties were still without power at 10.30am on Sunday on the Sunshine Coast.

Major roads were forced to close on Sunday, and Queensland Rail suspended trains between Gympie and Caboolture until Tuesday.

“For Monday and Tuesday there’s the chance of some storms around the central coast but we’re not seeing any signal about those storms being likely to be severe.”

The Sunshine Coast is forecast to have possible showers through to Wednesday with maximum temperatures hitting the high-20s through the week.

Brisbane is expected to reach a top of 28 degrees on Monday with possible showers. The Queensland capital is forecast to be mostly sunny on Tuesday and a top of 29, before nudging into the 30s for the remainder of the week.