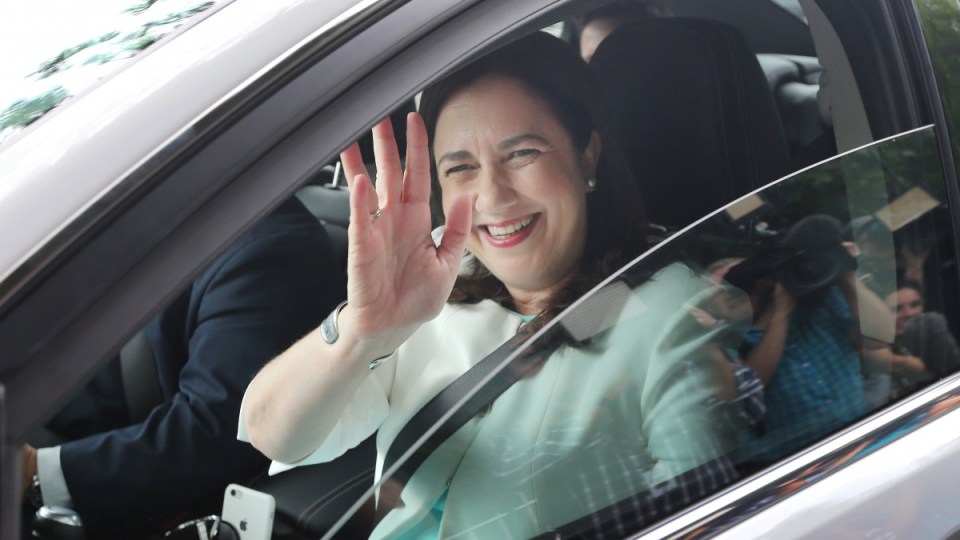 Ms Palaszczuk is the first female Premier in Australia to be returned to office at an election. Photo: AAP

Premier Annastacia Palaszczuk has visited the Governor after winning the Queensland election, with Labor securing at least 47 seats and majority government.

She is the first female Premier in Australia to be returned to office at an election.

Ms Palaszczuk’s visit with Governor Paul de Jersey lasted just under 15 minutes, according to the ABC.

He also announced he would stand down from the LNP leadership.

Labor has won at least 47 seats in the expanded 93-seat Parliament.

A one or two-seat majority gives Ms Palaszczuk some breathing room, after she had to rely on crossbenchers to govern in 2015.

This campaign she repeatedly promised not to form government with crossbench support even if it meant going into opposition.

Queensland’s 56th Parliament will have one of the most diverse crossbenches in years.

The state has its first elected Greens MP, the Katter’s Australian Party’s ranks expand to three, while One Nation has an MP for the first time since 2009.

Cabinet positions will be decided in the next few days, with the full ministry to be sworn in on Tuesday.

Mr Nicholls made the announcement he would stand down on twitter saying he was proud of the positive campaign the LNP ran.

“I take full responsibility for it,” he said.

“At the party room on Tuesday I will not seek to continue as LNP leader. It is time for a new generation of LNP leaders.”

Mr Nicholls had refused to concede defeat in the week after the poll, even after it became all but impossible for him to form even a minority government.

Instead he held press conferences to keep pressure on the Premier not to break a promise about doing deals with cross benchers.

Mr Nicholls took over the LNP leadership earlier this year from Lawrence Springborg.

He was Treasurer in the Newman Government where he was tasked with selling the public on its controversial asset sales policy.