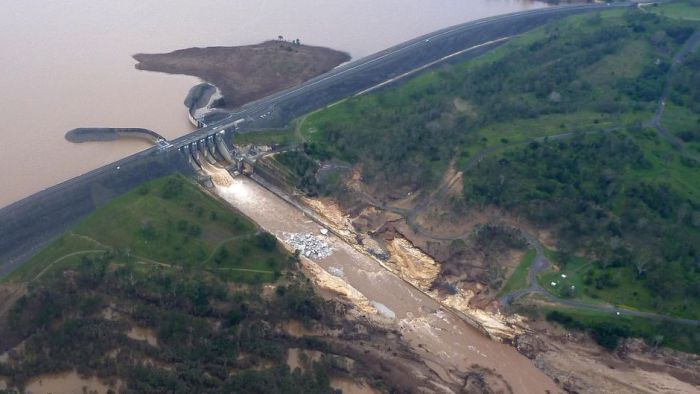 Water pours from a floodgate at Wivenhoe Dam after the 2011 flood. Photo: AAP

The lead clients in a class-action trial over the 2011 Queensland floods are guilty of “contributory negligence” because their shop was built on land that flooded 17 years before they moved to Australia, dam operators claim.

Law firm Maurice Blackburn has launched the case against Seqwater, Sunwater and the state of Queensland on behalf of about 6000 victims, claiming Wivenhoe and other dams were operated negligently.

The lead clients, Vince and Maria Rodriguez, lost about $100,000 worth of stock from their Fairfield Gardens store, which ultimately had to shut down because the shopping centre in which they leased was closed for months after the January 2011 deluge.

Nicholas Owens SC for the plaintiffs on Thursday told the NSW Supreme Court trial Seqwater had accused Mr and Mrs Rodriguez – and other victims – of “contributory negligence” and not doing enough to protect their properties.

Mr Owens said it was “a contention we struggle to understand”.

Fairfield Gardens shopping centre received developer approval in 1985 and, at the time, the council recorded that the property had flooded in 1974.

“They (Seqwater) say that if someone had asked the Brisbane City Council, these matters could have been discovered,” Mr Owens said.

However, Mr and Mrs Rodriguez did not move to Australia from El Salvador until 1991.

“Remember too, of course, 1974 was before Wivenhoe Dam was built,” Mr Owens said.

“As we know, the substantial purpose of Wivenhoe was to protect Brisbane from floods like the 1974 flood.”

Mr Owens said the clients had made “the most strenuous efforts” to protect their property.

Mr and Mrs Rodriguez weren’t able to get back into their shop until January 16 – about a week after the flood peak – and by that time $100,000 in stock was ruined.

The business permanently closed in June 2015, having never fully recovered from the financial impact.

Seqwater insists its engineers will be vindicated because they did the very best they could in extremely challenging circumstances.

Victims of the 2011 Queensland floods partly to blame, a court has heard