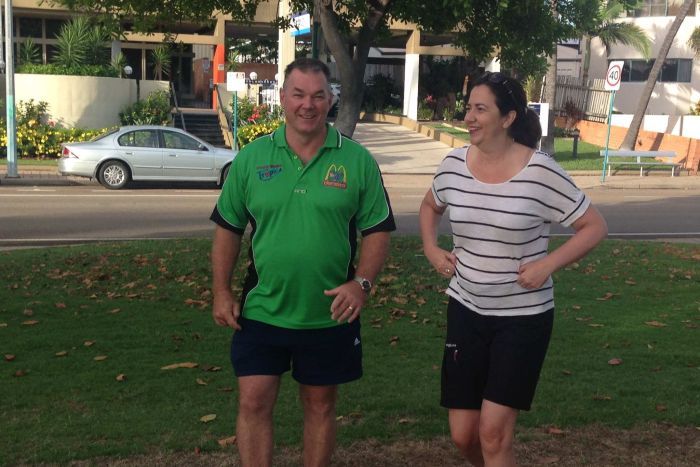 The ABC’s computer has awarded the knife-edge seat of Townsville to sitting Labor MP Scott Stewart over the LNP’s Casie Scott, which, if confirmed, would give it 48 seats to the LNP’s 39 – 47 seats are needed for government.

The Electoral Commission of Queensland (ECQ) has officially declared only 54 of the 93 seats available.Of those,  seats decided Labor has won 31, the Liberal National Party has 22 and Katter’s Australian Party has one seat.

In his victory speech for Townsville on Thursday Mr Stewart said he won  by 214 votes.

Despite this, Premier Annastacia Palaszczuk has yet to claim victory, 12 days after Queenslanders went to the polls.

The LNP told the ABC the party would wait on results from other north Queensland seats.

The man on track to be Queensland’s first elected Greens MP believes there’s “infinite potential” to change politics in the state.

Michael Berkman on Thursday claimed victory in the inner-Brisbane seat of Maiwar, a result which would make him the party’s first elected representative in Queensland parliament.

The Electoral Commission of Queensland is yet to officially declare the seat but the Greens are sure they’ve won and Mr Berkman’s Liberal National Party opponent, shadow treasurer Scott Emerson, has conceded defeat.

Mr Berkman says he won’t know how much influence he’ll hold until the final result is obtained but is confident he can make a difference.

“Obviously the final numbers are going to determine what role we might play but we’ve seen time and again just how influential a single Greens voice can be, whether it’s in council chamber or in the Federal parliament,” he said.

I think there’s infinite potential for us to do politics differently. To start engaging in a really constructive and productive way in parliament. I look forward to dealing with all the MPs that have been elected.”

Mr Berkman said he had already spoken to Robbie Katter and was hopeful of working with his MPs on issues such as electricity pricing.

He also refused to rule out working with One Nation despite the distance between the two parties ideologically.

“While there’s more common ground between us and some parties than there is between us and others, where we can see potential to work constructively and productively in parliament we will do that.”

Mr Berkman said pursuing a ban on corporate donations and holding Labor to its decision to veto a $1 billion federal loan application by Adani were his main priorities.

“We want to speak to those people who have been fed lies about the number of jobs that Adani is supposed to provide,” he said.

“There can be no doubt that this is a fantasy, the idea that this single project is going to resolve all of the issues of the regions is a nonsense frankly.”

Labor claims victory in Townsville, on track for 48 seats