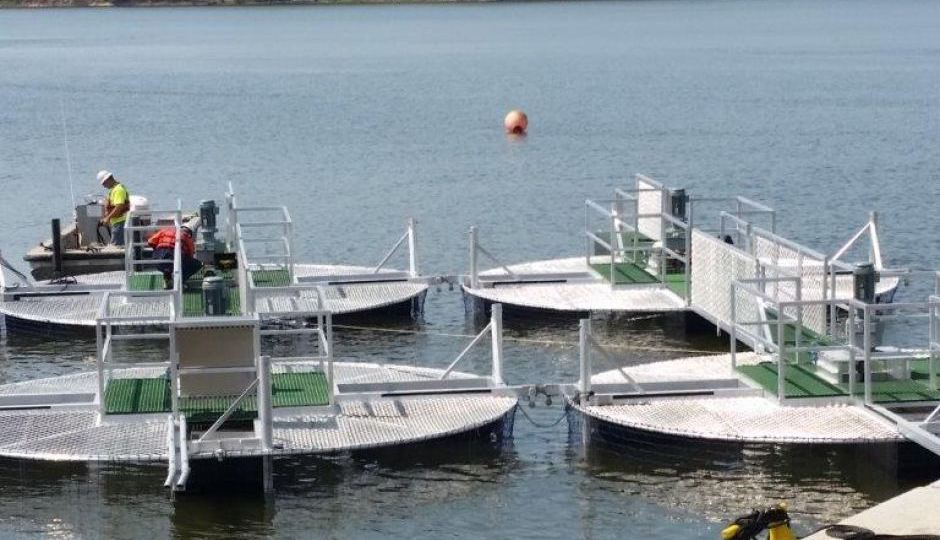 Eight huge reef mixer fans are planned for the Great Barrier Reef in far north Queensland, in a trial project that hopes to reduce the damage caused by coral bleaching events.

The Federal Government has announced it will contribute $2.2 million to the three-year pilot project, which will result in solar-powered rotators being placed at Moore Reef off the coast of Cairns.

The slow-moving ReefMix fans mounted on floating pontoons create water currents by gradually drawing cooler water from up to 30 metres below to the surface.

The pilot project will be combined with other interventions, including crown of thorns starfish control, to create coral refuges to protect biodiversity in pockets of the coast.

“We’ve found from the 2016 and 2017 bleaching, areas where there was upwelling or currents bleached less and recovered quicker,” she said.

We’re hoping that basically turning on the fan when it’s really hot will help keep the corals a bit more comfortable.”

The field trial is designed to protect a 1 square kilometre patch of reef from the worst effects of bleaching.

“This intervention will never save the whole of the Great Barrier Reef, but it will be important for some of our particularly valuable tourist sites, which of course are 64,000 jobs,” Ms Morris said.

The turbines are planned to be constructed in Cairns and installed in February, and are being jointly funded by the Federal Government and the tourism industry.

“What we do on land is when a species is particularly threatened … we may put a fence around it, kill all the feral cats and foxes,” Ms Morris said.

“This is doing almost an equivalent thing in the marine environment.

“Even if we decarbonise the economy tomorrow, we have 20 years of locked-in temperature increase, and so we have to start looking at how to protect some of that biodiversity.”

If the project is a success, the Reef and Rainforest Research Centre hopes to expand it to other sites, starting with key locations for the tourism industry.

The ReefMix devices are built by Queensland-based company WEARS Australia.