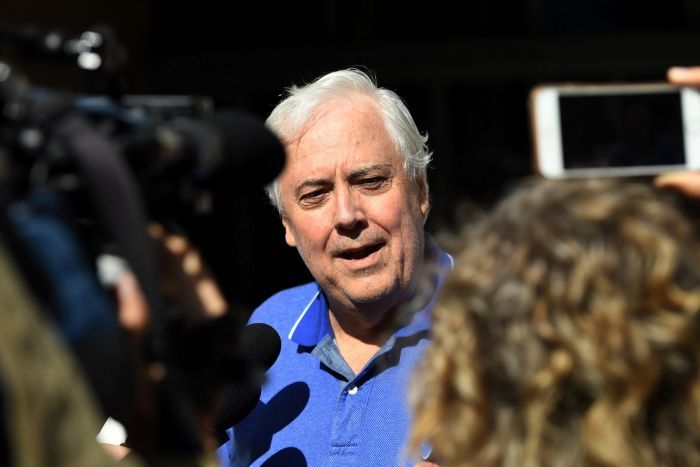 Justice John Reeves said he wanted an affidavit from Mr Palmer explaining the tweet by next week. (AAP: Photo: AAP

A judge has told Clive Palmer to explain why he apparently made a facetious tweet while he was supposed to be at a Federal Court hearing over the collapse of Queensland Nickel.

Justice John Reeves ordered Mr Palmer to give a sworn statement explaining a December 1 post from his Twitter account, made in his absence from a liquidator’s hearing in Brisbane.

As lawyers were discussing possible applications for contempt orders against the former federal MP that morning, the account tweeted a photo of Mr Palmer at an earlier court appearance with the words: “Hey memesters you vibin’ my style??”

Justice Reeves told Mr Palmer’s barrister Andrew Boe that he wanted an affidavit from the one time Rich Lister by December 13.

“I want an explanation … for the provenance and contents of the tweet reportedly promulgated under his name,” Justice Reeves said.

Mr Palmer did not attend court on Thursday.

The judge confirmed Mr Palmer had complied with an order, under threat of contempt, that he hand over documents relating to Queensland Nickel.

Liquidators are pursuing Mr Palmer over his alleged role in the collapse of the Townsville-based company in 2016, that left almost 800 people jobless and creditors, including the Commonwealth, owed $300m.

Had Mr Palmer not complied with the disclosure orders, liquidators FTI Consulting would have been allowed to raid his offices and seize documents relating to multimillion-dollar transactions involving Queensland Nickel.

Justice Reeves had told Mr Palmer to move “heaven and earth” to meet a Tuesday deadline for handing over the documents.

FTI Consulting, as part of separate legal action to recover money for creditors, has accused Mr Palmer of using Queensland Nickel as a “cash cow” while acting as a shadow director of the ill-fated business.

Mr Palmer has denied any wrongdoing.