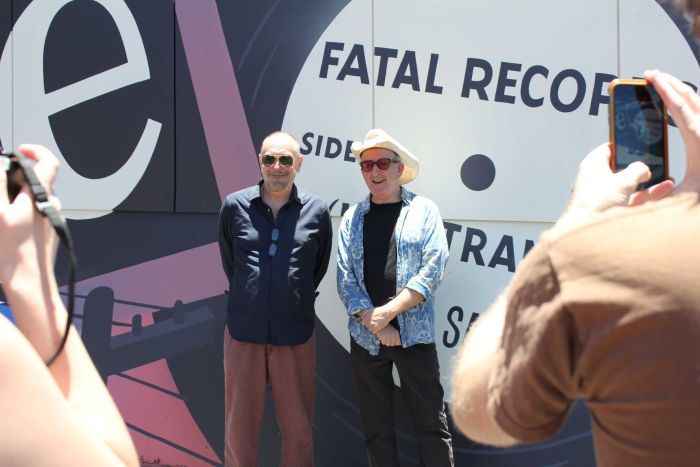 Ed Kuepper and John Willsteed at the unveiling of the mural celebrating The Saints. Photo: ABC

If travelling over Brisbane’s Go Between Bridge brings back memories of your favourite homegrown songs, visiting Upper Roma Street is about to have the same effect.

A mural dedicated to the musical success of beloved Brisbane punk rock band The Saints has been unveiled.

It features the band’s four founding members, their first album and lyrics from hit single (I’m) Stranded intertwined with imagery of railroad tracks, power lines and a large arched window.

The mural is around the corner from 4 Petrie Terrace; a location that once served as The Saints’ “illicit and unlicensed” venue.

Their earliest songs helped shape the punk music genre and were devoured by fans hungry for a new sound.

It didn’t take long for The Saints to be elevated to icon status, alongside groups like the Sex Pistols.

Transition from hippie to punk boy

He told ABC Radio Brisbane’s Craig Zonca the 1978 Saints song Know Your Product was the soundtrack to his transition from a hippie to a “punk boy”.

“There’s some great, strong, powerful images,” Dr Willsteed said of the track. “Listening images, like guitars and rhythms, and lyrical images as well.

I also think the first album … talked to how kids felt growing up in the suburbs in Brisbane – some kids anyway.”

Dr Willsteed said he gave the artists photographs, posters and other memorabilia from the era to help inspire the design.

“They used that as fuel to make something new but with a kind of style reference to the past,” he said.

“I sent the original drawings over to Ed and I thought he’d be a bit dubious about it but he was really happy with it.”

Kuepper was the only original band member able to attended the unveiling.

The empty wall was chosen for its proximity to Petrie Terrace, but Kuepper said it also backed on to a rail line that played a part in the creation of one of The Saints’ biggest hits.

“In fact, it is the train line on which I wrote the first bit of (I’m) Stranded, so that has some significance,” he said.

“I can only speak for myself but when I was doing it back then, I don’t think I had any notion that anyone would remember it more than a couple of years down the track.

“I think it’s nice people remember it after all this time.”

His favourite part of the mural wasn’t the depiction of his mates or their breakthrough album, rather an existing barbed-wire fence that borders its top.

“I like unadorned brick walls, but I’ll make an exception in this case because they’ve left the barbed wire in.”