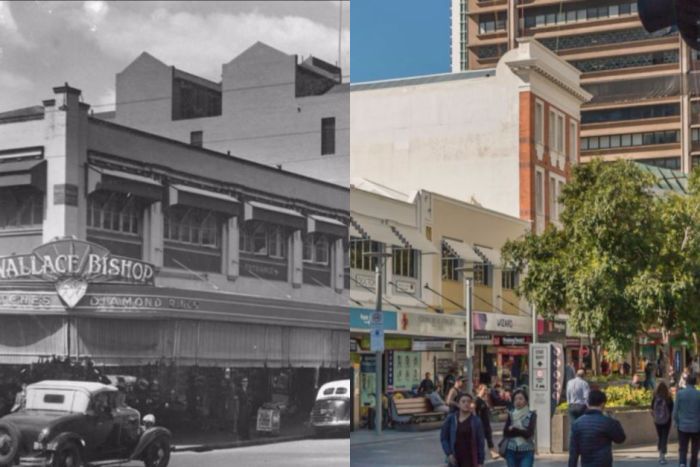 Lining up the photos of Brisbane is the key is the success of the image. Photo: John Oxley Library and Nick Verburgt

An “interactive time machine” is giving Brisbane residents a chance to look back on just how far the city has come over the past century.

Photographer Nick Verburgt is documenting the changes in Brisbane’s cityscape – from the removal of trams to the construction of towering structures.

Already this year he has photographed more than 70 locations for his website thennnow, lining up photos from 140 years ago with his shots and blending them together seamlessly.

“It started just with some old family photos. My sister and I went around and took pictures of where Dad’s family used to live in Brisbane back in the 1950s,” Mr Verburgt said.

“Back in February I started working freelance and had more time to work on different projects I’ve got rattling along in my head and that’s one I wanted to delve a bit deeper into.

“I put the site online towards end of June and it’s just sort of been building.”

Mr Verburgt said his project hit its stride when he began sharing his work with Facebook communities dedicated to both Brisbane’s and Queensland’s history.

“There’s still lots to learn. There’s also people who tell stories like when they went there as a kid … there are some interesting stories,” he said.

“Those communities are really good with sharing stories and information. It’s been really interesting.

“I do it for me but the fact other people are interested as well is nice.”

Mr Verburgt said he often ventured out armed with his camera and his phone, loaded with locations he was yet to visit.

“When I go out for my walks, I line them up, go on a long wander through the city and try and take a few each time,” he said.

Mr Verburgt sources the “before” photos from either the archives at the Brisbane City Council or the State Library of Queensland.

That’s the easy part – replicating the image, making sure everything lines up perfectly is the hard part.

“It takes a bit of practice. I’m getting OK at it now just cause it saves me going back,” Mr Verburgt said.

“I really want to get it right the first time. I’ve been back to Anzac Square three or four times.

“Getting it exactly right is really tricky. If it’s not the right angle it just looks wrong, and I’m really nerdy with getting it as perfect as possible.
With some I say it’s not good enough and go back and try again … I’ve got to be further away or a metre higher.”

He said reference points in the foreground or background helped.

“If you move left or right the window won’t line up with the wall … it’s quite nerdy but it’s part of the fun.”