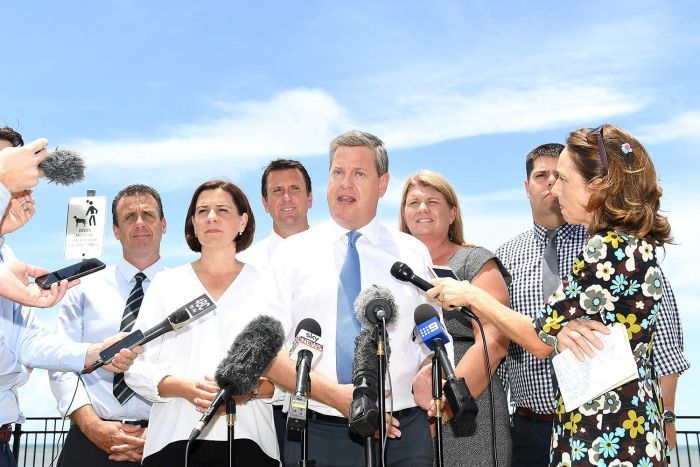 One MP says Mr Nicholls is going to find it "very, very tough" to keep his job. Photo: AAP

Tens of thousands of postal votes are yet to be tallied, nine days after the state election.

The ABC’s election computer predicts Labor will secure 47 seats, but the ALP is not officially claiming victory until it is 100 per cent certain of achieving a majority.

The LNP is also not conceding defeat, with the Electoral Commission of Queensland still accepting postal and absentee votes up until 6:00pm on Tuesday.

The ECQ says its staff are “working tirelessly” to finalise the count, but already there is debate about the future of LNP leader Mr Nicholls and why the party failed to secure more seats.

‘Tough for Nicholls to hang on’

The LNP’s Dale Last is in a nail-biting contest to keep his seat of Burdekin, where One Nation picked up 29 per cent of the primary vote.

“It comes back to north Queenslanders not feeling like they’ve been heard — that dissatisfaction with the major parties,” he told the ABC.

“We [the LNP] thought we had a good message. We thought our announcements were solid, but obviously that message didn’t get across.”

He said the future LNP leadership would be a matter for the party room, which could meet later this week.

“Tim’s had his run in the top job. I think he’s going to find it very, very tough to hang onto that job,” he said.

“For me, it’s about making sure we strike the right balance between city and country.

“We need to be sending a message Queensland-wide that we are a party for all Queenslanders and not just for the south-east corner of the state.”

Asset sales back on the agenda?

“He would have made — may still make, who knows — a great premier,” Mr Elmes said.

And in a surprise post-election post-mortem, Mr Elmes also threw his support behind future asset sales.

Asset sales were a key theme of the campaign, with Mr Nicholls forced to repeatedly rule out a return to the policy he drove as treasurer under the Newman government.

But Mr Elmes said asset sales should be reconsidered in the future as a way of paying off Queensland’s ballooning debt.

Sooner or later, Queenslanders are going to have to face up to the fact that they need to pay off the bank card.”

“We either keep printing money and you can’t do that. Or in my view, you offload some of the assets that you’ve got that you don’t necessarily need to be in public hands anymore, so that you can invest back into new assets that do need government help to kickstart.

“You just don’t hold onto these things forever. Time comes to offload some of these things and at some stage in the future, the Queensland people are going to have to have that debate and maybe have a change of mind.”

In the post-election soul searching, former Nationals senator Ron Boswell blamed the merger between the National and Liberal parties for the LNP’s poor showing.

But LNP president Gary Spence was adamant a split was not on the cards.

“There is no discussion within the LNP around a demerger and anyone suggesting otherwise is mischief making,” Mr Spence said.