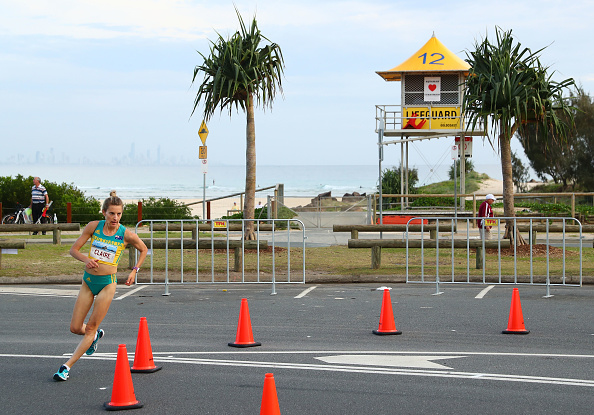 Claire Tallent goes around a corner as she competes during the Race Walk Test Event on the Gold Coast. Photo: Getty

The Gold Coast City Council says its venues will all be finished and ready to host the Commonwealth Games ahead of the opening ceremony on April 4, 2018.

“I can assure everyone we are games ready, we’re on time, on budget,” Gold Coast Mayor Tom Tate says. “They’re all completed.”

Additional fixtures such as temporary seating and lighting will be installed by the Gold Coast 2018 Commonwealth Games Corporation (GOLDOC) in the coming months.

All of the council venues are now ready for those additions to be installed. After the games, these temporary facilities will be stripped out and the venues returned to community use.

“Bumping in” temporary facilities is part of the council’s plan to reduce white elephant venues and avoid having to replace stadiums in the future because they are the wrong shape or hold too many seats – a problem Sydney is now facing with the round 2000 Olympic stadium.

The Gold Coast Aquatic centre, for example, has a permanent seating capacity of 1000. Temporary seating brought in for the Commonwealth Games will expand capacity to 12,500 seats. Post games, the pool will be returned to the community. Temporary seating can be fitted and removed in the case of large events.

Mr Tate says the use of temporary facilities extends the use of the venues, reduces maintenance costs and ensures the future benefit of hosting the Commonwealth Games games goes to the Gold Coast community, not just big business.

The $40 million Coomera Indoor Sports centre, the venue for gymnastics and netball, is one new building that has been earmarked for community use.

Built in an area that lacked sporting facilities, Coomera is the “centrepiece for the transformation of the northern Gold Coast into a significant elite and community sports precinct” according to the council website.

Construction commenced in early 2015. The Centre was officially opened on 5 August 2016.

Now, on any given day, Coomera is packed with teenagers playing basketball and preschoolers practising gymnastics.

McDermott, a former Olympian who moved to the Gold Coast to train future gymnastic stars, has two gymnastics centres on the coast – one at Miami and one at Coomera.

In the next few months, GOLDOC will remove McDermott’s gymnastics equipment and install the Commonwealth Games facilities. Basketball hoops will be replaced with netball posts – temporarily.

Post games, Coomera will return to community use. The venues facilities and function rooms are available for community hire for a small fee creating a constant stream of revenue.

Each Gold Coast council venue had to pass an economic viability test, Mr Tate says. Future use was high on the list of criteria. The venue had to have a way to earn money after the athletes were gone.

As a result, up to 80 per cent of the council venues chosen were pre-existing. The renovated venues are now attracting events to the Gold Coast that previously would not have been attainable.

The Broadbeach bowls club, renovated at a cost of $4.95 million and completed in 2016, for example, hosted the World Junior Championships that year.

In 2019 the club has already been booked for the Asia Pacific Championships and it will host the World Bowls Championships in 2020.

Post the games it is action packed we have 800 events booked for the 12 months post-Commonwealth Games, we have major projects happening”

Sport was not the only future use considered by the council when assessing future economic benefits.

The Commonwealth Games athletes village will eventually become housing for hospital and university staff in the Coast’s “Health and Knowledge precinct” next to Griffith University and the Gold Coast Hospital.

Studio 9, which will host the squash competition, has been built as a working sound studio for Village Roadshow. Four other existing sound stages on the production lot are currently being fitted with temporary courts for table tennis and boxing.

Film studios make great games venues. They can be transformed easily into any scene and they already have equipment installed for cameras and sound.

“It’s the first time that a soundstage has been used for games, for me to have it on the world stage is a fantastic opportunity for us,” Lynne Benzie, President of Village Roadshow Australia says.

Benzie says the addition of Studio 9 now means the Gold Coast film studios have the biggest footprint of any film studio in the Southern Hemisphere – a massive selling point for future films.

The cost for Studio 9 was shared between Village Roadshow and GC2018. Benzie says the economic benefits it will bring the Gold Coast will reach into the billions.

Commonwealth Games 2018: Gold Coast venue preparations are ‘on time and on budget’