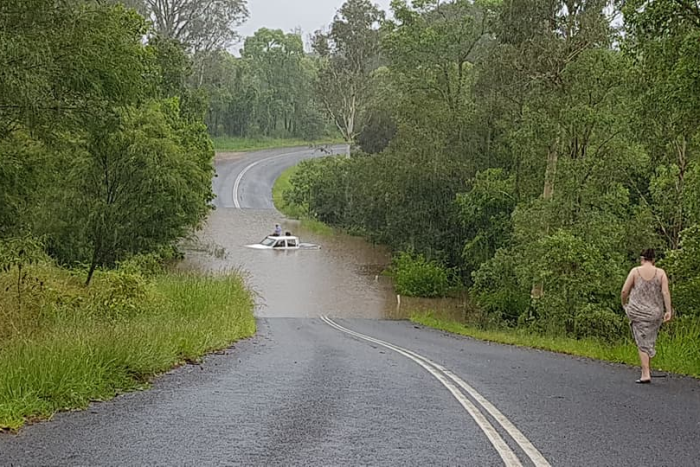 A man was lucky to escape from this latest floodwater incident. Photo: Supplied Tena Burron

A man has been rescued after driving his car into floodwaters north of Brisbane, as parts of southern Queensland brace for flash flooding brought on by a day of heavy rainfall.

A rain band is stretching from Gladstone over the New South Wales border, causing localised flooding at Bargara, east of Bundaberg, Gympie, and on the Sunshine Coast and in Brisbane.

Bureau of Meteorology forecaster Diana Eadie said there had been large rainfall totals near the Sunshine Coast.

“Since 9am, Mount Mee has recorded 94 millimetres, Reedy Creek has received 68mm,” she said. “We’ve seen heavy falls all the way to about Bundaberg.”

A severe thunderstorm warning for flash flooding has been issued for people in Redland City and Logan, the Gold Coast, Sunshine Coast, Brisbane City and Moreton Bay areas as well as the Central Highlands and Wide Bay districts.

Ms Eadie said the weather would contract to the south-east into Tuesday.

“Certainly at least for the next few hours we’re going to see a peak in those rainfall totals – [we] couldn’t rule out it carrying on until the evening as well but the good news is by dawn tomorrow … when most people roll out of bed this activity should have cleared the coast,” she said.

‘It could’ve been a very dangerous situation’

Earlier on Monday, a man had to be rescued near Gympie after driving into floodwaters.

The man was forced to climb out of the window of his car and take refuge on its roof for 20 minutes before emergency services arrived.

“If his vehicle had floated off the roadway he would have ended up in a very dangerous situation,” he said.

A Queensland Fire and Emergency spokesman said crews were called to two cars in floodwaters at Durack in Brisbane’s south about lunchtime, but the occupants had escaped by the time help arrived.

Seqwater will release water from Somerset Dam into Wivenhoe Dam over the next 24 hours.