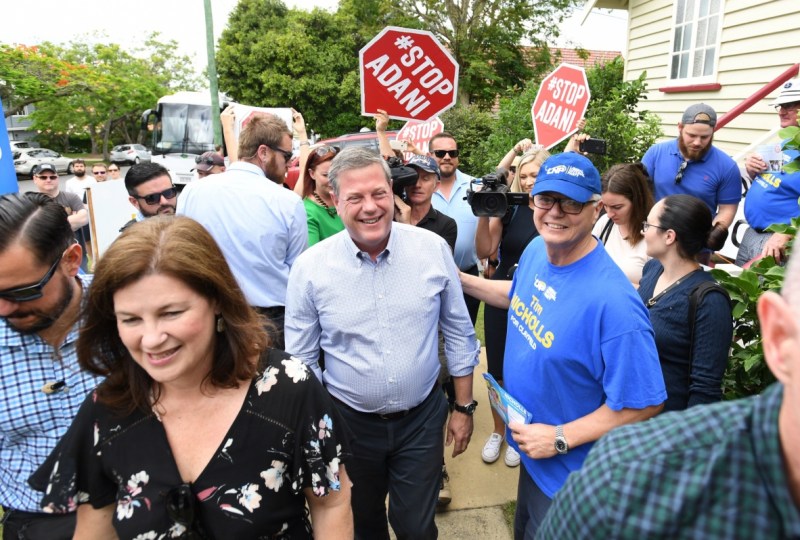 Queensland Premier Annastacia Palaszczuk was happily ensconced in the ‘Tower of Power’ on Monday, but Opposition Leader Tim Nicholls was nowhere to be seen as both parties waited on the results in 11 undecided electorates.

Labor is leading the seat count following Saturday’s state election and is predicted to win a narrow majority, though the result is far from certain, and Labor could find itself in a position of having to do a deal with one of the minor parties or independents.

Mr Nicholls did not front the media on Monday, as speculation swirled about possible leadership tensions within the Liberal National Party following the poll, and whispers of a possible de-merger.

Ms Palaszczuk meanwhile launched back into work on Monday, in a move no doubt designed to show the Premier still in charge and undertaking business as usual, despite the lack of an election result.

They discussed a range of topics, including the ongoing recovery of local councils from Cyclone Debbie.

“(Tuesday) marks eight months since Cyclone Debbie crossed the Queensland coast and I thought it was important that today we got an update about any outlying issues that need to be resolved,” the Premier told reporters.

As of Monday, Labor had won 43 seats with just over 75 per cent of the vote counted and were projected to be on track to win at least 47, which would give them a majority in the new 93-seat parliament.

The LNP meanwhile was sitting on 36 with a predicted tally of 40, not enough to form government in its own right and unlikely to be able to cobble together a minority government.

Former Newman government minister and new LNP Member for Broadwater David Crisafulli took to the airwaves on Monday morning, sidestepping questions about whether he was in leadership contention for the party by calling to re-engage “cheesed off” voters.

“We also owe it to people to give them the kind of government that they remember in years gone by, where oppositions were strong and decisive but were also willing to work to get an outcome.”

Federal Attorney-General George Brandis was in Brisbane and defended Mr Nicholls’ leadership, but said the LNP needs to have “a very honest discussion with itself”.

LNP frontbencher John Paul Langbroek said it was “far too early” to get into leadership speculation.

“It’s inappropriate to even canvass those sorts of discussions when we are still in the situation of counting all the votes.” Mr Langbroek told reporters on the Gold Coast.

Tim Nicholls out of sight as count continues in Queensland