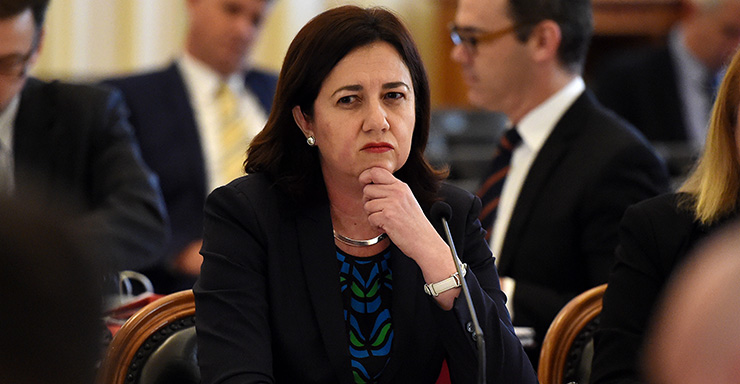 Annastacia Palaszczuk should scrape home with a tight but workable majority.

Annastacia Palaszczuk will be returned as Queensland Premier with her government likely to win up to 48 seats, giving it a slim majority, ABC election analyst Antony Green says.

He said he was certain Labor would have at least 46 seats, with the ABC election computer predicting they would win one or two more, clearing the 47 needed to govern with a majority.

One Nation and the Greens are predicted to win one seat each, Katter’s Australia Party two, and one independent.

Palaszczuk confident ‘of a Labor majority’

Ms Palaszczuk said she was confident she would secure a majority.

Ms Palaszczuk, who joined likely new Labor MPs in a Brisbane park, said she would be “back to work” on Monday, but it was too early to talk about a ministry.

“As soon as every vote is counted, then I will be talking to my colleagues about the future ministry,” she said.

She refused to say whether her promise not to do deals with any crossbenchers would stand, if she falls one seat short.

“I’m not even thinking about that … I am confident of a Labor majority,” she said.

There were swings against both major parties, and Ms Palaszczuk said she would work to engage better with Queenslanders.

Ms Palaszczuk said she would make an effort to work with people who voted One Nation.

“It is now my job to work with people who feel somehow separated from the normal hussle and bussle of politics,” she said.

Green said on his numbers it looked like the Palaszczuk government would get a majority.

“But even if she falls a seat short, she doesn’t have to do any deals,” Green said.

“She can leave it to the Parliament to vote her out, because it would be unlikely that all the crossbench would vote against them at once.

“So it is very hard to see how anyone other than Annastacia Palaszczuk can form government in the new Parliament.

“They have a certain 46, and they only need one more vote and at the moment we are giving them another two seats on a prediction.”

He said the Greens had done well in inner-Brisbane.

“They are strongly in the running to pick up the Liberal seat of Maiwar from Scott Emerson — a frontbencher,” Green said.

“It is unclear whether Labor or the Greens will win it, but certainly the LNP won’t win that seat.

“[The Greens have] equalled Labor’s vote in South Brisbane, but been defeated by the LNP preferencing Labor first.

Green said although One Nation had done well, it was not well enough to win many seats.

“There is a strong likelihood they could win the northern mining seat of Mirani — that’s the only one,” he said.

“The only other seats where they have done very well, the LNP has been re-elected on Labor preferences.”

Opposition Leader Tim Nicholls and Deputy Deb Frecklington have had coffee with supporters in Hendra.

“It’s now in the hands of the scrutineers and the votes have been cast and we just wait for them to be counted and we’ll see what happens and what the outcome of the people of Queensland is,” he said.

Mr Nicholls was asked if he was expecting a leadership spill.

“Oh I’m not going to talk about any of those sort of things today,” he said.

“We’re going to celebrate a great campaign that had a positive message, that was talking about a future of hope and optimism for Queenslanders.

Prime Minister Malcolm Turnbull said he had spoken to Mr Nicholls and Ms Frecklington, who he said had run a good campaign in a tough environment.

“The election was fought overwhelmingly on state issues, and one thing that we know from Australian politics is that Australians are very smart in the way they go about voting,” he said.

“Of the remaining 13 seats in doubt, we need to win four seats for a Labor majority,” he said.

“We are leading in six of these seats and very close in five further seats.

Mr Moorhead said Labor succeeded in keeping One Nation from the balance of power.

“Our principled decision to put One Nation last has rescued the LNP in regional Queensland, where their vote collapsed,” he said.