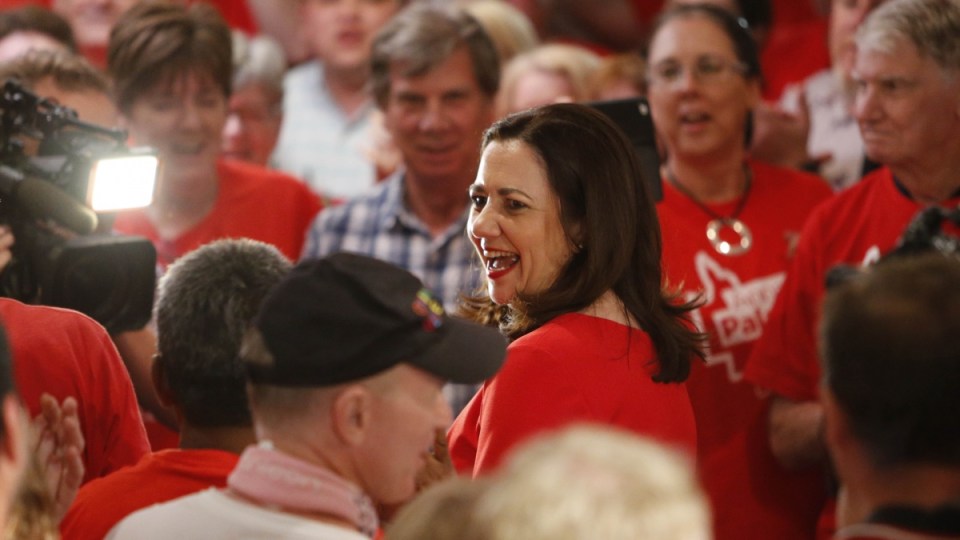 Queensland Premier Annastacia Palaszczuk’s confident election night prediction that she would be able to form a majority government appears to be on the money as counting in the state election continues.

“Tonight, we are close to the peak but we are not quite there and we will not get there tonight,” Ms Palaszczuk told supporters in the Brisbane suburb of Oxley shortly before counting was suspended late on Saturday night..

“But I remain confident we will be able to form a majority Labor government once all the votes are counted.”

She ruled out doing a deal with One Nation to govern but did not extend that pledge to other parties or independents, despite earlier promising Labor would reject deals with any party or parties.

A vote to shake things up: Nicholls

Opposition Leader Tim Nicholls demanded Ms Palaszczuk “keep her promise” to not form government with the support of One Nation or other parties.

“What is abundantly clear is … Queenslanders have voted to shake things up,” he said.

And that shake up could extend to Mr Nicholls’ job, with reporters getting no answer when they quizzed him on Sunday about speculation that his days atop the LNP are numbered.

“I’m not going to talk about any of those sort of things today,” he told reporters at a Brisbane cafe. “I’ve got some friends and supporters who are here, we’re going to celebrate a great campaign.”

Despite One Nation leader Pauline Hanson predicting the election would be “bigger than 1998”, when the party won 11 seats, its hopes were dashed.

According to an ABC analysis on Sunday of the ongoing count, One Nation appears likely to claim only a single seat — the same as the Greens.

One Nation’s Queensland leader, LNP defector Steve Dickson, failed to hold on to his Sunshine Coast seat of Buderim while the party’s former federal senator Malcolm Roberts, a casualty of the ongoing citizenship fiasco, also lost in Ipswich.

Senator Hanson said she was disappointed for Mr Dickson and blamed a Labor “scare campaign” for the party’s overall result.

“It was a scare campaign that the Labor party did. Saying that a vote for the LNP is a vote for One Nation, people were confused about it,” she  said.

The Queensland result will be used by the Federal Opposition and internal critics within the Turnbull government to further heap pressure on the Prime Minister ahead of the final two weeks of Parliament on Monday.

Indeed, that dissatisfaction with Mr Turnbull’s policy manifested itself on Sunday morning, when conservative north Queensland LNP George Christensen tweeted a provocative apology to One Nation voters for the Coalition’s policies and leadership – negatives he said had driven them to alternative candidates.

“This will lead to leadership instability with the federal leadership,” predicted Queensland Labor senator Anthony Chisholm.

Liberal frontbencher Jane Prentice denied the result was a reflection on the Turnbull government, saying the campaign was fought on state issues. “There’s no federal story out of tonight,” she said.

In a further post to social media, Mr Christensen suggested the political divide across the state meant “the case for a separate North Queensland state is strong after tonight”.

“There are clearly two Queenslands,” he wrote.

While Labor suffered regional swings against it, those results were offset by strong performances in the southeast.

Deputy Premier and South Brisbane MP Jackie Trad confirmed expectations that she could beat back a strong challenge from Greens candidate Amy McMahon.

The regional rise in the One Nation vote crippled the LNP, with the Opposition’s primary vote falling to 33 per cent – a swing of seven per cent.

The Opposition’s chances were further hampered by One Nation’s decision to preference against all sitting members, a move that hurt LNP MPs in the regions where support for Senator Hanson’s party was strong.