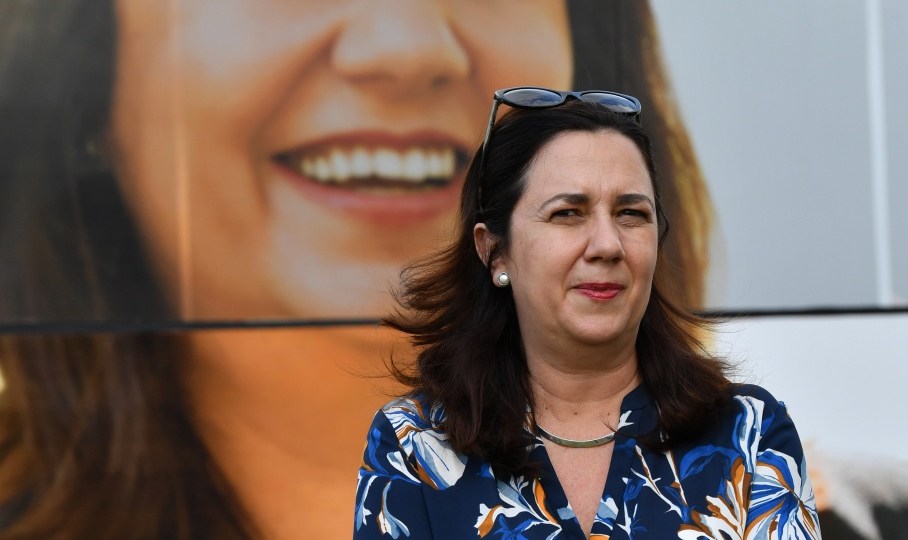 Premier Annastacia Palaszczuk is looming large in the polls as Queenslanders prepare to pick a government in Saturday's election. Photo: AAP

Labor Premier Annastacia Palaszczuk is poised to make Australian political history with a second Queensland election victory in a tight race that could still go down to the wire.

Queensland’s three million voters go to the polls in 93 electorates on Saturday with the premier eying the magic number of 47 seats to gain a cherished majority for the first time.

The polls significantly have Labor ahead of the Liberal National Party – 52-48 on a two-party-preferred basis – but the reintroduction of compulsory preferential voting and the rise in support of One Nation has the parties on tenterhooks.

It’s in the regions where the premier faces her biggest fight, according to the latest Galaxy poll published in The Courier-Mail, with the LNP holding 52 per cent of TPP support.

However, renowned ABC political analyst Antony Green says it’s in the highly-populated southeast, home to two thirds of the seats, where Labor will win the day.

A Labor victory would make Ms Palaszczuk, 48, the first Australian female politician to win two elections at either state or federal level.

On her final day of 27 on the hustings, she played down the polling, claiming she still faces an uphill battle.

“Tomorrow is like climbing Mt Everest,” the Inala MP said.

The premier went on to appeal to traditional LNP voters to abandon their party to ensure Queensland would not be racked by the influence of Pauline Hanson, who has led One Nation’s campaigning.

“Your choice is to support a One Nation coalition or, just this one time, to vote Labor for a strong, stable majority government,” she said.

She is desperate for a majority and has insisted there will be no deals with minor parties or independents, even though that’s what she’s done to rule.

LNP leader Tim Nicholls has been plagued by the issue, refusing to rule out accepting One Nation’s support to form minority government, and he slipped up addressing it with a monumental blunder on Friday.

“If you want a stable majority government, then the best thing to do is to support your LNP, One N… uh … LNP candidate at the election,” he stumbled on breakfast television before blaming the mistake on a tiring campaign.

Deputy Premier Jackie Trad, who is under pressure from the Greens in her seat of South Brisbane, expects the outcome would rest on protracted preference counts.

“We’re not going to know on the night, definitively,” she said.