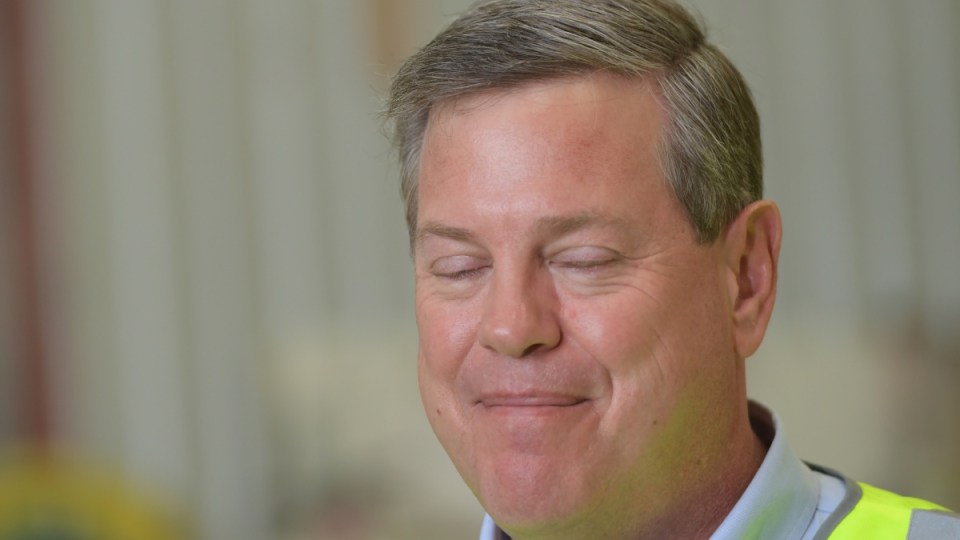 Mr Nicholls blamed his slip of the tongue on the pressures of the campaign trail. Photo: AAP

As last-minute campaigning steps up a notch on the eve of the Queensland state election, LNP leader Tim Nicholls has accidentally alluded to the potential for his party to form a minority government with One Nation’s help.

Speaking on the Seven Network on Friday, Mr Nicholls was caught out by an embarrassing slip of the tongue, appearing to be on the verge of urging voters to support One Nation in Saturday’s poll.

“If you want a stable majority government … then the best thing to do is to support your LNP, One N, uh, LNP candidate at the election,” he said during a round of interviews with breakfast television shows.

He later told reporters the stumble was down to the long days on the hustings.

“Look, it’s been a long campaign,” he said from Pumicestone, the first stop on his southeast seat blitz on Friday.

“I was simply going to say that you need to vote one for your local LNP candidate as I’ve probably said 500 times during this election campaign.”

Despite his earlier gaffe, Mr Nicholls later said there was no prospect of an LNP, One Nation coalition, and no room for One Nation at the cabinet table.

“I’ve been clear all the way through, there is no deals, no coalition, no shared ministry, but we won’t pull the wool over voters’ eyes, we won’t treat them like mugs, we won’t disrespect their vote,” he told ABC TV.

“We are about implementing our agenda, and only our agenda.

“We go into this contest to win, and to win strongly,” Mr Nicholls said.

The slip-up comes as One Nation leader Pauline Hanson rubbished the latest Courier Mail Galaxy poll showing support for One Nation in Queensland has slumped from a high of 18 per cent to 12 per cent.

“I don’t believe that. I believe there is support for One Nation on the ground,” she told Seven, with the poll showing support for the far-right party is much higher in rural and regional Queensland with 20 per cent of respondents indicating they will vote for One nation.

One Nation’s vote in the state’s populous southeast stands at eight per cent.

“The test will be tomorrow at the polling booth and I believe a lot of people are voting for One Nation,” Senator Hanson said.

“Do you really want another four years under Annastacia Palaszczuk? What has she done for the state? Absolutely nothing.”

It was up to voters to decide who they would preference on the ballot paper, but One Nation has put all sitting MPs last on their preference cards, she said.

Ms Palaszczuk is refusing to do a deal with One Nation to form government if necessary after Saturday’s election, while Mr Nicholls repeated he will deal with the parliament elected by the people of Queensland.

‘Up to the people of Queensland’

Ms Palaszczuk, who led the ALP to minority government at the 2015 election against the divisive Campbell Newman, said it was now up to the people of Queensland after 27 days of campaigning.

“At the last election I had to climb Mount Everest and I think I am trying to do it again,” she told the Seven Network on Friday.

She again warned the opposition LNP could only form government with the help of One Nation.

The Galaxy poll shows Labor ahead of the LNP 52 per cent to 48 per cent in two-party preferred terms, but also shows a sharp divide between voters in regional Queensland and those in the state’s populous southeast.

The poll suggests Labor could reach the 47 seats necessary to form government in the expanded 93-seat parliament by winning enough electorates in the southeast to offset losses elsewhere.
Labor’s primary vote in the southeast stands at 40 per cent, against the Liberal National Party’s 36 per cent, with the Greens on 12 per cent and One Nation at 8 per cent.

However, the LNP is ahead across the rest of the state, where its primary support stands at 33 per cent to the ALP’s 30 per cent.