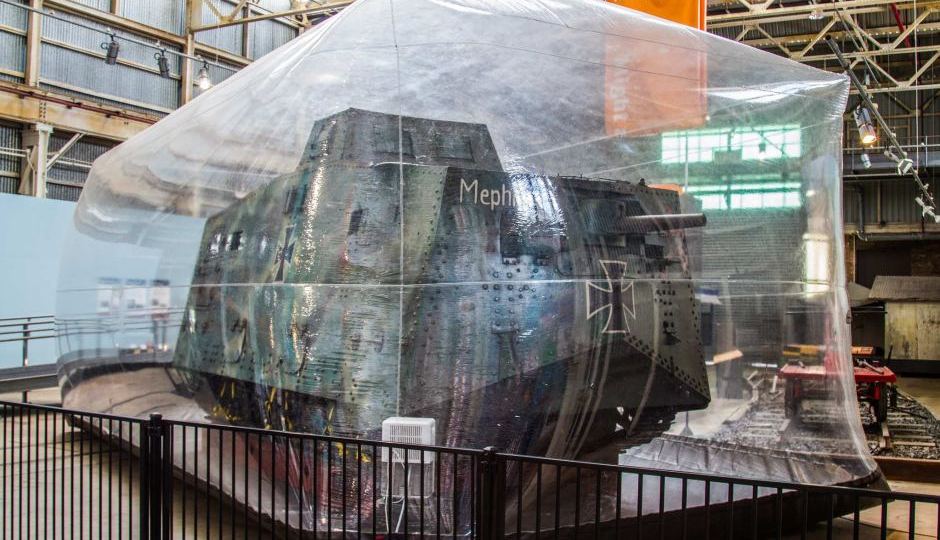 The German A7V tank is being cared for in Ipswich at The Workshops Rail Museum. Photo: ABC

Mephisto, the world’s only German A7V tank from World War I, is being housed in a massive plastic bubble west of Brisbane.

“Only 20 of these tanks were made,” said Jennifer Wilson, senior curator at the Workshops Rail Museum in Ipswich. “Germany was late to tank warfare in WWI.

“The tank has been put in a protective cocoon so we can control the humidity, keep it dust free and safe while it’s with us.

The imposing A7V Sturmpanzerwagen had quite the journey before arriving in Queensland.

“This tank was out on an advance to take back the area around Villers-Bretonneux on the Western Front in France,” Ms Wilson said.

“It got stuck in a hole and the manoeuvrability wasn’t quite there yet, so it remained.

“The German crew left the tank and the Allies retook that ground and salvaged the tank as a war trophy for Queensland in 1918.”

Queenslanders and Tasmanians from the 26th Battalion took the tank under the cover of darkness.

“They got it on a ship and across the water to Australia and it has been on display as part of the Queensland Museum since that time,” Ms Wilson said.

It arrived at Norman Wharf in Brisbane in June 1919 and was towed to the Queensland Museum on Gregory Terrace by Brisbane City Council steamrollers.

In 1986, Mephisto was then relocated to Queensland Museum at South Bank until the 2011 floods.

It also spent time in Canberra at the Australian War Memorial in 2015 to mark the 100th anniversary of WWI.

“It’s being prepared now to be placed back into an exhibition at the Queensland Museum about WWI and Queensland history which will open late 2018.

“The operation to get it back there will be a big one and will involve shutting down roads and multiple cranes used to get the tank in place.”