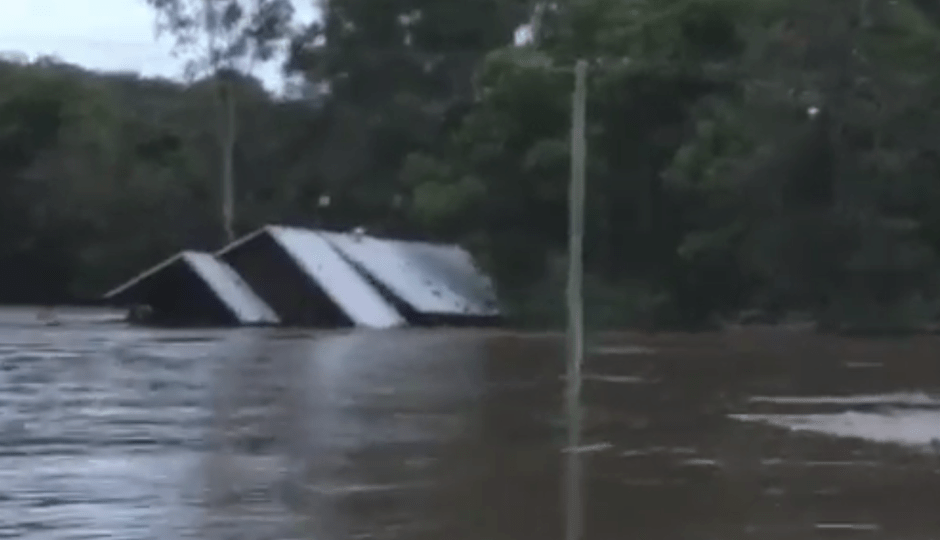 A house was swept away in floodwaters minutes after the family clinging to the roof were rescued.

A family has been saved from the roof of their home on the northern Gold Coast minutes before it was swept away in floodwaters.

The dramatic rescue played out in the early hours of Saturday morning as the flooded Albert River devastated a street at Luscombe.

The mother and two children had waited on the roof for hours in the dark.

“It took us approximately an hour to dodge the high trees, the powerlines, the stuff that was coming down the river,” Mr Ferguson said.

“I climbed over the balcony hands and knees along the awning, stood up and made my first real contact with the parent and the two kids.”

Watch the footage of the house being swept away

The trio were helped into the boat, along with another man and two dogs who were inside the home.

Fifteen minutes later, the house was swept away.

“It was, tough … the scariest thing I’ve ever done,” Mr Ferguson said.

The remnants of the house, and neighbours’ sheds, stretch hundreds of metres down the quiet rural street.

Angelique Golbach’s house, just a couple of doors down, had water swept through its first floor, and her front lawn was covered in piles of mud-soaked belongings.

“The water was coming up very quickly — by the time we realised it was coming in the house there was time to grab four or five things and the kids and get in the car,” Ms Golbach said.

She said the next step was to sort through what was left and see what could be salvaged.

Just down the street Craig Detheridge’s bus was swept on its side.

He said he had never seen water so powerful.

“It was unbelievable, out here it was doing a hundred miles an hour, it was like rapids out there,” Mr Detheridge said.

“Bit of a night of memories I’ll never forget.”

Queensland Premier Annastacia Palaszczuk paid tribute to the efforts of the SES.

“If it wasn’t for the SES we would not have four people with us, so a big thank you to the team,” Ms Palaszczuk said.

“To save another person’s life, another family, I can’t express my gratitude enough.”

Floodwaters sweep away house minutes after family rescued from roof