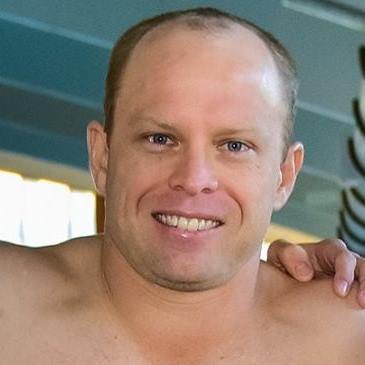 There are renewed calls for a widespread cull of crocodiles in north Queensland after a spear-fisherman was killed and a teenager mauled in waters around Innisfail.

Warren Hughes, 35, went missing on Saturday, and a search was sparked after his dinghy and speargun were found off Palmer Point, just north of Innisfail.

Water police pulled his body from the waters south of Palmer Point around 8am on Monday and say initial investigations suggest he was taken by a large crocodile.

It’s believed to be the second crocodile attack in two days in far north Queensland.

In a separate incident before dawn on Sunday, a Queensland teen was mauled by a croc after acting on a foolish boast to swim at night in the croc-infested Johnstone River.

Lee de Paauw, 18, is considered incredibly lucky to be alive and is recovering in hospital after undergoing surgery on his badly mauled arm, after a dare gone wrong.

Just last Thursday the government released its updated crocodile management strategy, implementing a single framework for the northern region of the state to replace several existing strategies which had been in place.

Mt Isa MP Robbie Katter said the strategy did not go far enough, and called for a cull before more people are killed.

“There’s no question they’ve got to be culled, nature’s got to be brought back in balance,” Mr Katter told AAP.

“To say to someone living in north Queensland ‘well just be more careful’ that’s a very callous statement.”

The weekend’s incidents prompted concern from the mayor of the Cassowary Coast, John Kremastos, who told ABC Radio the area around the Johnstone River used to be safe to swim in.

“The biggest concern for us is the negative impact it will have on our tourism and lifestyle” Cr Kremastos said.

“For example, I believe surf lifesaving membership has decreased dramatically, especially in the nipper groups, because parents don’t want their kids in the water.”

Mr de Paauw, who acted on a foolish boast to swim in a croc-infested river, appears to have learnt his lesson, vowing he won’t try the dangerous stunt again.

The teenager has undergone surgery for gruesome wounds to his arm after he leapt into the Johnstone River at Innisfail just before 2.30am on Sunday.

Asked on Sydney radio if he would jump into the river again, the teenager told by Nova FM’s Fitzy and Wippa: “No, I wouldn’t.

“I’ve been in that river before, you know? And I didn’t expect it to happen.”

British backpacker Sophie Paterson, 24, said she had been drinking with the 18-year-old who had been boasting to drinking companions at a local hostel he was willing to take a night-time dip in the river — a known crocodile habitat.

Within seconds of leaping from the Innisfail esplanade wharf, he was engaged in the fight of his life when a croc took him in its jaws.

“He was talking about the local creek saying ‘I can swim out’ and so we said ‘go on then’, but we didn’t think he would do it,” Ms Paterson has told The Courier-Mail.

“It all happened very fast, pretty much as soon as he jumped in, there was splashing and screaming. There was blood everywhere and he just wouldn’t stop screaming.”

Ms Paterson later told Nova that Mr de Paauw’s exploits had done nothing for her.

“Being attacked by animals doesn’t really do it for me.”

The teen was incredibly lucky to have freed himself from the croc’s jaws before it went into a death roll and drowned him, paramedics say.

He is now expected to spend the week in hospital recovering.