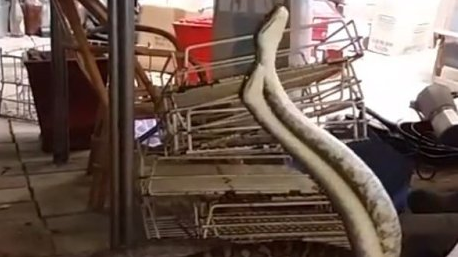 Two snakes entwined in a wrestling match have been captured on video, puzzling viewers over whether they were mating or fighting.

Dayboro Butter Factory owner Murray Paas said he had walked into his kitchen to find the two snakes – each at least two metres long – thrashing and spiralled around each other.

“I thought they were mating since the difference in colours led me to assume they’re of opposite sex,” he wrote on Facebook.

“But a couple of people have said this is a pair of males battling over a nearby female.

“Either way, I’d rather they take it outside. Hypnotic to watch though.” 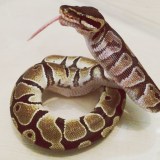 ‘Snakes on a train’: Japanese bullet train forced to stop

The snakes were at it for more than an hour, he said.

After Mr Paas put the video on Facebook, it quickly attracted hundreds of comments by people speculating about what the snakes were up to – and quipping that they wouldn’t have been sticking around to film it.

“I would not have been there with my phone taking a video of them, I would have crapped myself and ran a mile,” Aleesha Brazell joked.

“They’re trying to push each others’ heads to the ground to establish dominance,” he said.

While the property is on the Dayboro main drag, it also backs onto a creek, and snakes are a fairly common sight.

“One of these ones has been living above my bedroom in the ceiling,” Mr Paas said.

“I’m fine with it because it keeps the pests away.”

While stumbling across the wrestling snakes “did shock me a bit”, Mr Paas said it was not his first snake encounter – he has been woken in the night in the past by another pair of snakes hanging from the ceiling, probably mating.

Watch the encounter below: