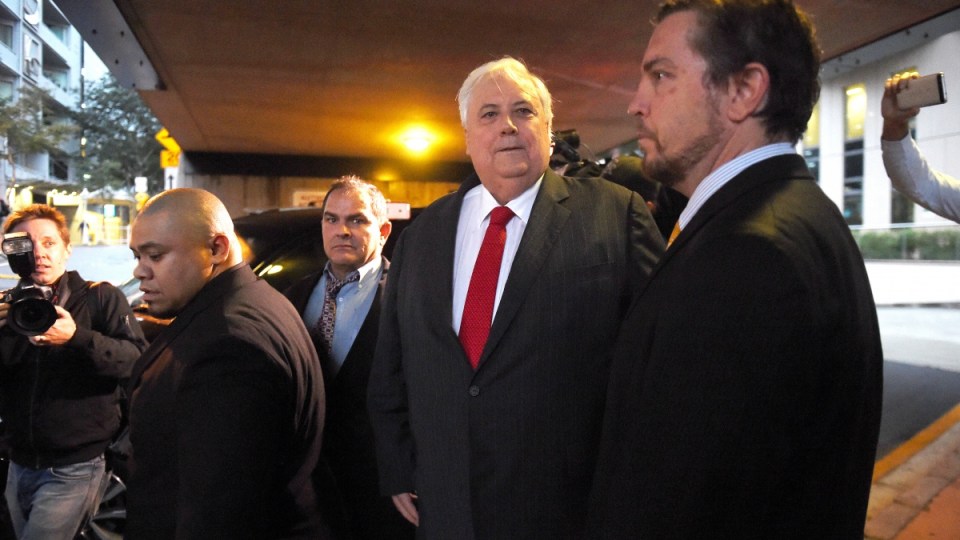 Former federal MP Clive Palmer has slammed the media for being “aggressive” towards him and his wife as they fled a Brisbane court flanked by four burly bodyguards.

Mr Palmer’s private security and media clashed outside the Federal Court on Friday after he faced intense questioning from liquidators about the management of Queensland Nickel in the lead-up to its collapse earlier this year.

When asked outside court why he had personal security guards, Mr Palmer replied, “Because of deadbeats like you”.

Mr Palmer tweeted on Saturday it was sad the media had become aggressive in order to get a story.

“It is a very disturbing situation that my wife Anna was aggressively pushed whilst the media was harassing me in pursuit of coverage,” he said.

Gatecrash Security owner Mark Ellis, who was one of the four men who had accompanied Mr Palmer, said he was proud his employees had acted professionally.

Mr Ellis said Mr Palmer, whether he was colourful or not, deserved free passage to his car.

“Clive’s a walking headline, we know that ,” Mr Ellis said.

“We walked with him, we didn’t approach media, they approached us and jammed cameras in our faces.

“The boys were professional, there were no punches thrown.

“(Mr Palmer’s) got a hold of all the footage, he’s extremely impressed with how we acted.”

Mr Ellis said the incident in which a photographer was allegedly pushed into a bush was actually a case of a person trying to bump one of the “most immovable guys you’ve ever seen”.

Mr Palmer will return to court on Monday to continue giving evidence.