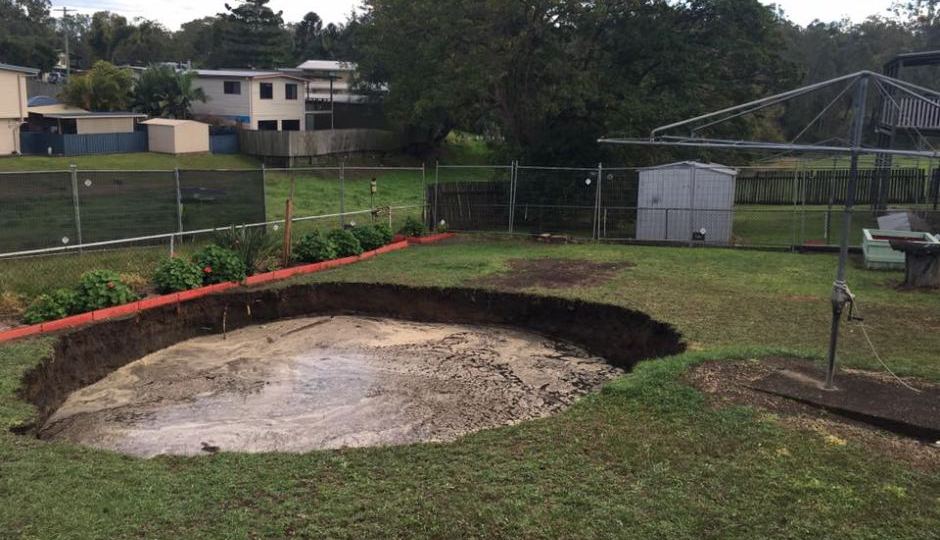 The sinkhole has been cordoned off amid fears it could increase in size. Photo: Facebook: Paul Pisasale

A sinkhole that opened up in a couple’s backyard in Ipswich, west of Brisbane, could become much bigger, a mining expert says.

Ray and Lynn McKay woke up on Tuesday morning to discover the sinkhole, which grew throughout the day to about 8 metres in diameter.

The McKays said some of the earth fell into the pit of swirling water again on Wednesday morning.

University of Queensland’s Occupational Health and Safety in Mining Professor David Cliff said the site was unstable, with water eroding the surrounding topsoil.

“The concern is that this hole could get much bigger if the water in that hole has destabilised the strata underneath the surface,” he said.

“There must be some potential for it to get bigger.”

Authorities have ruled out a burst water pipe, with sights now turned to investigate whether a vertical mine shaft was responsible.

Geotechnical engineers returned to the Coal Street home on Wednesday.

Professor Cliff said a geological inspection with radar or sonar was needed to determine the cause.

It would look at density differences to detect cavities and water flow then map underground contours to look for solids and gaps.

Professor Cliff said it was possible a pillar that held up the roof and strata above the coal seam collapsed, causing the sinkhole.

“It’s possible over time those pillars lose their strength then the roof will collapse,” he said.

“They’d have to identify what’s causing it and the likelihood of the hole progressing to any bigger size.”

Professor Cliff was surprised to see water in the sinkhole, as generally old underground workings were dry.

“[There may have been] a subterranean creek or river flowing which has caused the erosion so the top soil suddenly collapsed.”

Queensland Mines Minister Anthony Lynham said the government would pay the repair costs for the works to the McKay’s property.

Restless night for the McKays

Mayor Paul Pisasale said the homeowners, who have lived at the property for 25 years, had a restless night in a hotel.

He returned with them to their home early on Wednesday morning.

He said the water inside the hole would be tested for contamination before it could be discharged.

Water now being pumped out of #Ipswich sinkhole @ABCNewsBrisbane pic.twitter.com/pDVwSOoTit

“It is devastating. It’s grown a bit bigger, some fell in before since we have been here.”

The couple lost everything in the 2011 floods.

“We were just getting back on track. Things were going very well,” Ms McKay told Nine News.

The Department of Natural Resources and Mines is determining an appropriate method to pump and dispose of water from the sinkhole.

Professor Cliff said if an old mine caused the sinkhole, engineers would need to fill the adjacent areas to prevent the hole getting bigger.

“You can try backfilling, historically in Ipswich they’ve put lots of concrete into holes to try and block them all up,” he said.

“[Or] you can bridge over the top. It may be more effective. What you can do it put a cap a few metres below the surface and then just fill on top of that.

“It depends on what’s underneath, how stable the sub-strata is.”