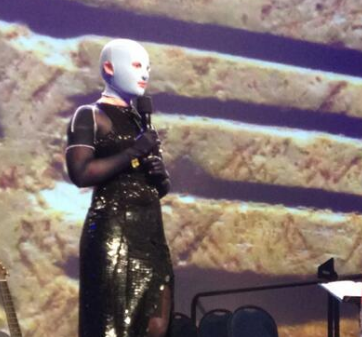 Paris Turkington speaking at a function in Brisbane. Photo: Twitter

A teenager who suffered severe burns at a 2013 party in Toowoomba, west of Brisbane, is suing a mother for $11.8 million for failing to supervise the gathering.

Paris Turkington was 16 years old when she suffered third-degree burns to 42 per cent of her body and face because a teenager threw an accelerant on the fire.

Ms Turkington continues to wear a whole-body pressure garment for up to 23 hours a day, according to a Supreme Court insurance claim.

The claim is against the woman whose son arranged the party and invited Ms Turkington to the gathering.

The document alleged Paris’s mother Phoebe Turkington asked the other mother if she needed help supervising but the woman said she did not need assistance.

The claim alleges the mother failed to adequately supervise the teenagers; and failed to secure or confiscate the accelerant or keep a proper lookout.

“In truth and in fact, at no time during the duration of the gathering was any adult present to act in a supervisory capacity other than the defendant herself,” the claim stated.

The Courier Mail has reported that before Ms Turkington was burnt, about midnight on August 25, 2013, there were allegedly many instances of youths spraying and pouring methylated spirits or kerosene on the fire.

The lawyer representing Ms Turkington, Jillian Barrett, said she would never fully recover from her injuries.

“This has had a devastating impact on a young girl, she was on the cusp of a very bright future,” she said.

“It’s a significant claim, but it is for a lifetime of the care and treatment that she needs and also her career cut short, before it even began.

“What happened to Paris could have been prevented if the party was properly supervised.

“If there was adequate supervision she would not be where she is now.”