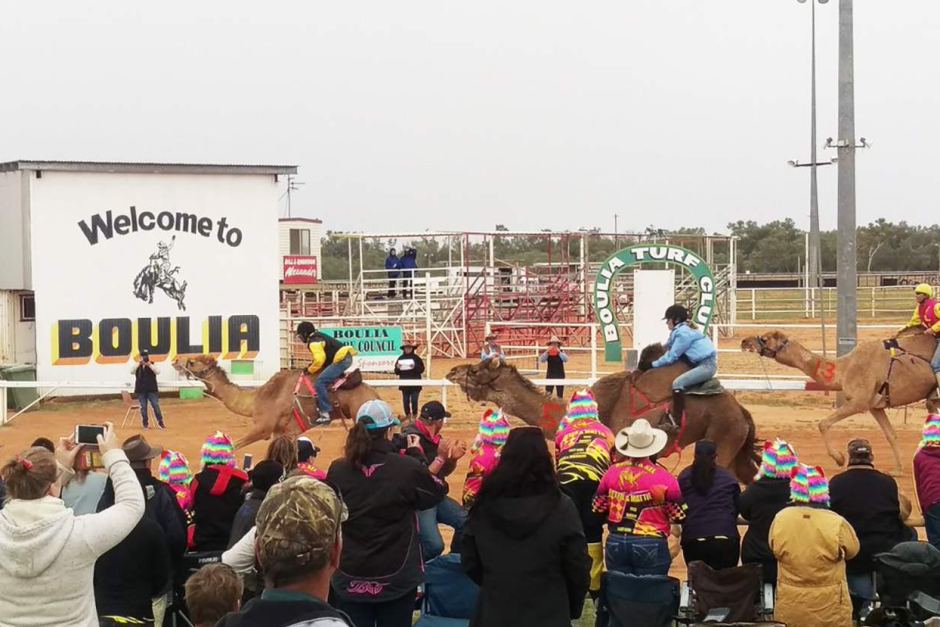 The dreaded camel has transformed from feral pest to beloved drawcard in the western Queensland town of Boulia, where thousands of people gathered this weekend for the 20th annual camel races.

Dubbed the Melbourne Cup of camel racing, the event offered some spectacular finishes for the crowd of about 2500 people, even if the competitors themselves were somewhat erratic.

There was another spectacular finish when Wason came from 200 metres behind to hit the lead right at the post in his 1000-metre heat.

Alas, Wason failed to replicate that effort in the 1500m Boulia Cup final by giving up the race lead to suddenly head off in the opposite direction, leaving South Australian camel HookMUp to win the cup for the second year in a row.

Big boost for town in drought

Tourists flocked to Boulia for the iconic races from as far away as Perth and Adelaide, with hundreds of caravans parked in the town showgrounds – dramatically swelling the town population, which is normally less than 600.

Boulia is about 540 kilometres west of Longreach, along a dusty track, and has come to rely upon the annual visitor migration.

Mayor Rick Britton said spectators brought in more than $400,000 to the town.

“The streets are full of tourists all walking around, the locals embrace that and it’s all positive,” he said.

“That’s where you go to give people credit 20 years ago for coming up with this.

“It’s taking the negative impact a camel was having on the environment in Australia into something positive.”

The event is Boulia’s only drawcard this year because the four-year drought has already prompted the cancellation of other big events.

Stations in the region are 60 per cent destocked, meaning local grazers could not supply the Easter rodeo and camp draft.

It also means the ships of the desert have become the lifeblood of the outback town.

Mr Britton said the races are also a chance for locals to catch up.

“We’ve got some pretty big properties out here and if you’re working on your own or with your family day to day it does get monotonous,” he said.

“That social interaction I think is very crucial the wellbeing of the people here. It’s not only dry, we did have extreme heat and that was mentally challenging.”

The camels now head to Winton for the last event of the outback season.

Camel-power takes to the track at dusty Boulia