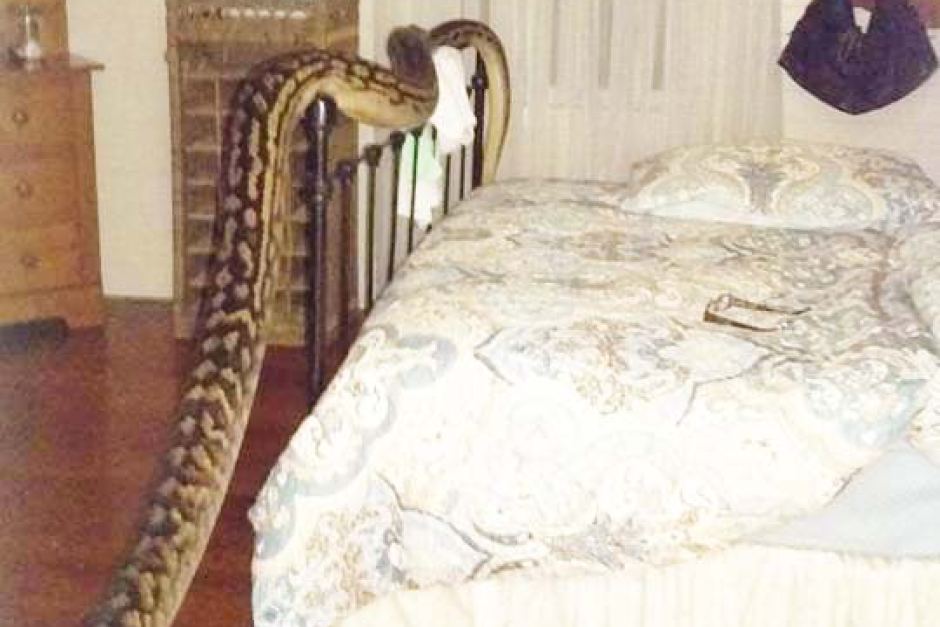 A Queensland woman has woken to a terrifying and uninvited house guest in her Mission Beach bedroom – a five-metre, 40-kilogram python.

Julie Birrell was horrified to find the Scrub Python stretched all the way from the living room into her bedroom while staying at her friend Trina Hibberd’s home.

It is believed the python, nicknamed Monty, had been living in Ms Hibberd’s roof for at least 15 years – apparently not an uncommon occurrence in far north Queensland.

Ms Hibberd told the ABC she first saw the snake 15 years ago, when it poked its head into the bathroom when she was having a shower.

“We knew the snake was there but I had never seen it inside, not that I know of,” she said.

“I’ve never seen it in its full length.”

This time, the python chose to reveal itself during the dead of the night, crawling out of the roof and into the lounge room at about 4.30am on Monday.

Ms Birrell was the one who raised the alarm, alerting her host to Monty’s intimidating presence on the lounge room wall.

“All hell broke loose,” said Ms Hibberd, describing how the snake had managed to knock a lamp over and even switch off a light switch.

The pair managed to lock the snake in the bedroom and call snake catcher Dave Goodwin.

Monty was still in the bedroom when Mr Goodwin arrived.

“We walked in the bedroom, it was hanging from the curtain drapes down to the bedside table – and that was only a third of him,” he said.

“It was a good monster.

“We locked ourselves in the bedroom, grabbed around his neck, he coiled around his arm but manage to put him a container.”

Mr Goodwin, who said he had only ever seen one larger snake in his career, managed to cram Monty into a large petrol container.

He decided to release Monty into a local sewerage pond, where he won’t have any trouble finding food – it apparently has a rodent problem.