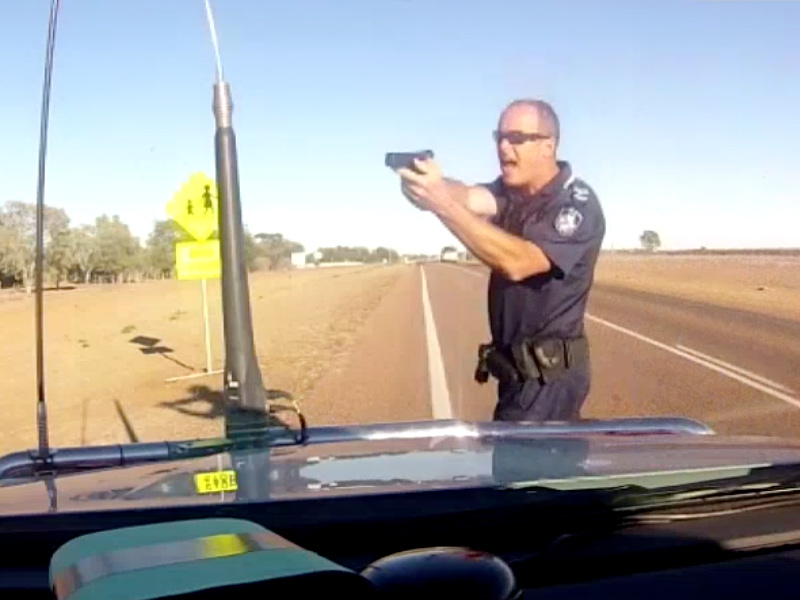 The ABC has obtained exclusive footage of the moment a senior constable pulled a gun on a motorist caught speeding in outback Queensland.

The video is part of a collection of clips tendered to a civil hearing before a judge in the Supreme Court as the now-suspended policeman fights to have his pay reinstated.

The first video shows Senior Constable Stephen Flanagan driving on the Landsborough Highway on the outskirts of Longreach before he spots a ute driving 126 kilometres per hour in a 110kph zone.

It was tendered by lawyers for Police Commissioner Ian Stewart in an affidavit responding to Flanagan’s application.

The video shows Flanagan trying to use his horn to pull the driver over while his siren is off.

The driver slows down, drives off, then pulls over again amid more honking.

The dashcam shows Flanagan emerging from the police car, pointing a gun at the driver saying: “Get out of your f****** car right now.”

Also tendered to court was a smartphone recording made by the driver’s partner as she sat in the ute.

“What the f*** are you pulling here today?” Flanagan said to her partner.

“You came past me – I’m bloody beeping the horn up the side to point you over and you still keep driving.

“You didn’t see me? Right, where’s your licence dickhead?”

The driver was then handcuffed while Flanagan checked his registration but was released a short time later when the senior constable realised it was not a stolen car as he first assumed.

The couple later filed an official complaint prompting the immediate suspension of Flanagan.

He was also charged with assault and deprivation of liberty after an investigation by the Ethical Standards Command.

But Flanagan said withholding pay during his suspension was unfair.

In his application to court, Flanagan said he thought the car was stolen and he had not realised his sirens were not on.

In submissions, senior police management said it stood by its decision and tendered another video of Flanagan in a separate incident on the Gold Coast in 2013 in which he was stood down for failing to treat a driver with appropriate dignity and respect.

In this video, he pulled a driver over on the M1 motorway for allegedly speeding.

As the driver explained his actions, his keys were thrown to the ground.

“We’ll go to court and I’ll sit there and drink coffee and laugh my ass off while you get convicted, how’s that sound?” Flanagan said.

Flanagan will face court on the criminal charges in relation to the Longreach incident later this week while the Supreme Court decides on the outcome of his pay.

Under the suspension order, he is still allowed to find casual work for the time being.