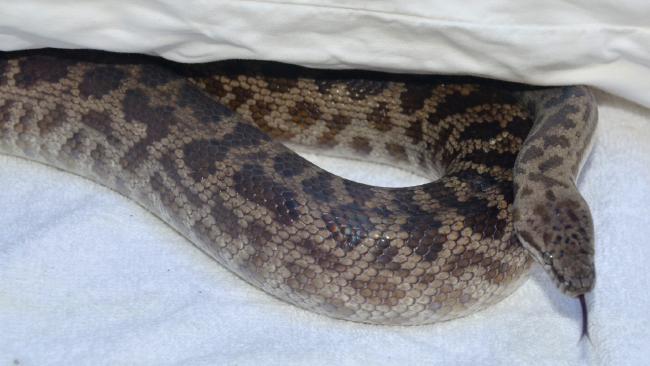 A north Queensland man has been bitten by a metre-long snake curled up under a pillow on his bed.

The Trinity Beach resident was going to sleep on Friday night when he slid his hand under the covers, only to get the fright of his life.

Cairns snake catcher Matt Hagan was called to remove the 1.2-metre reptile and comfort the man and his wife, who had been rattled by his screams.

“His wife was in the lounge room at the time and said he was making some noises that weren’t very compatible with sleep,” Mr Hagan told AAP.

“When I got there, his wife was steadfastly refusing to go back inside the house … she suggested we either burn it down or they were moving to New Zealand.”

The spotted phyton left the man with a small nip on the finger before quickly retreating to a bedside table.

Mr Hagan said it was one of the fattest snakes he’d had to relocate.

A warm bed would seemingly be the ideal spot to curl up for a winter hibernation, but Mr Hagan said snakes are still active because of unseasonally warm weather.

“We’re still getting calls that pets are being eaten, which we usually see die off around this time,” he said.

Mr Hagan also relocated a coastal carpet python from a boat at Kuranda over the weekend.

Queensland man bitten by snake under his pillow