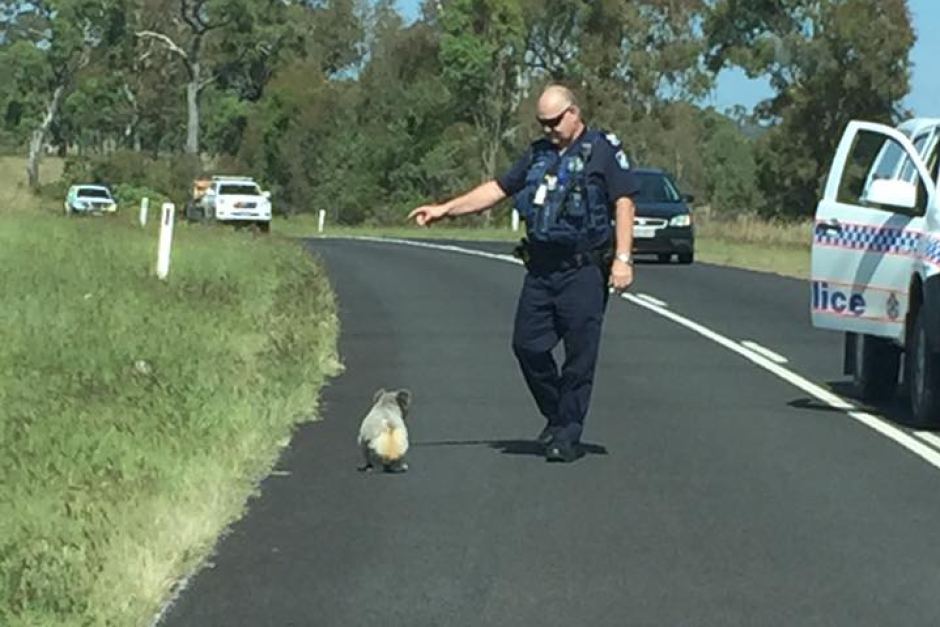 A Queensland police officer has been praised for shepherding a koala to safety after it refused to budge from the middle of a busy highway.

The mischievous koala wandered onto the Brisbane Valley Highway at Samford at about 11:00am on Saturday.

When the police officer arrived, he stayed close to the marsupial until it was off the highway and had taken refuge in a tree.

Sunshine Coast University Professor Peter Timms who studies koalas thanked the officer for making sure the animal left the road.

“Not everybody takes that bit of extra effort so that’s great by the officer to make sure it found its way somewhere safe up a tree.

Professor Timms said koala’s were not moving around too much at the moment as it is not their mating season.

“Having said that, male koalas are always on the move,” he said.

“They do move around to feed, they have their favourite eucalypt trees and home ranges.”

Professor Timms said if motorists saw a koala on the road, the best thing to do was stop and wait for it to get off the road.

“If they appear to be injured or sick with something like chlamydia, there are koala hospitals you can ring up and get a professional to come out and look at them,” he said.

“Never try to pick up a koala, they’re wild animals and they have sharp claws.”

Labor victory fires up Tamil family’s hopes of return to their Biloela home
Perth residents urged to play it safe as massive storm rolls across region
Joe Biden says he’s not fussed by North Korea’s rumoured return to nuclear tests
ACTU hails Labor’s triumph as the first step to pay raises
Analyst: Sharemarket will be anxious about a Labor pact with Greens
French foreign minister hails defeat of Morrison and his ‘notorious incompetence’
Qld’s billionaire ‘brickie’: ‘I own the ASX 200’
Today's Stories