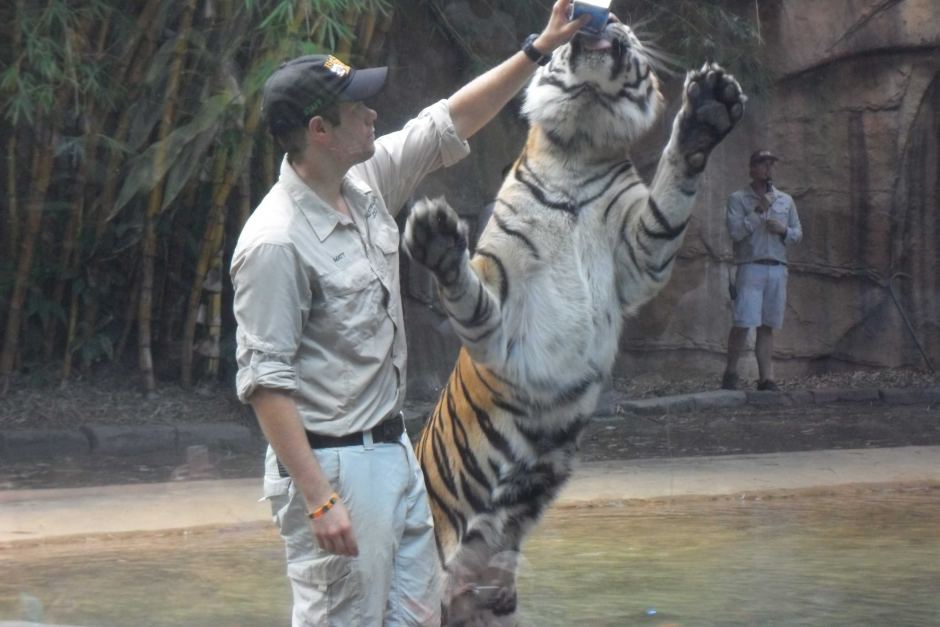 An Australia Zoo keeper suffered puncture wounds and scratches to his head and arm after a Sumatran tiger “swatted his paw” at him.

Zoo owner Terri Irwin said the 41-year-old man was injured when the 120-kilogram tiger, named Ranu, got “hot and bothered” at the Sunshine Coast zoo about 10:40am.

“He had two deep puncture wounds, deep scratches from the tiger to his left forearm and head and other minor scratches to his body,” he said.

QAS ad earlier said the man’s puncture wounds were the result of a bite.

In a media release, Australia Zoo said the man was “scratched during a routine morning enrichment session”.

“While walking through surrounding bushland at the zoo, Ranu … became overly interested in his surroundings and when his handler approached him to change direction, he swatted his paw resulting in a scratch on his left wrist, bicep and right side of the forehead,” the statement read.

“Both Ranu and the handler are well.”

Hot day @AustraliaZoo. One of our tigers got hot & bothered and scratched a keeper. Keeper is ok, tiger is ok. pic.twitter.com/Ycuuidr0hm

The man was discharged from hospital on Thursday afternoon and is expected to return to work in the coming days.

“Our much loved Ranu will continue his normal enrichment routines at Australia Zoo,” the statement said.

According to the zoo’s website, Ranu is a “mischievous tiger”.

“Every tiger has their individual personality and the handlers learn how to adapt differently to each tiger. With Ranu, the handlers have to keep in mind that he is the boss and it is very important to be patient with him,” it read.

It is not the first time a big cat has attacked a handler at the zoo.

In 2013, a handler was mauled after a Sumatran tiger became overexcited during a play session.

Australia Zoo is a popular tourist destination, founded by the family of “Crocodile Hunter” Steve Irwin, who died in 2006.

Amber Heard’s sister and friend give evidence
‘Should have been a penalty’: Boy crash-tackled by PM gives his verdict
Apple sued over ‘ear shattering’ AirPods alert
Russian Google to file for bankruptcy
Man arrested at NSW school for bestiality
Concern about COVID-19 deaths in aged care
Toddler dies after wall collapse
Today's Stories