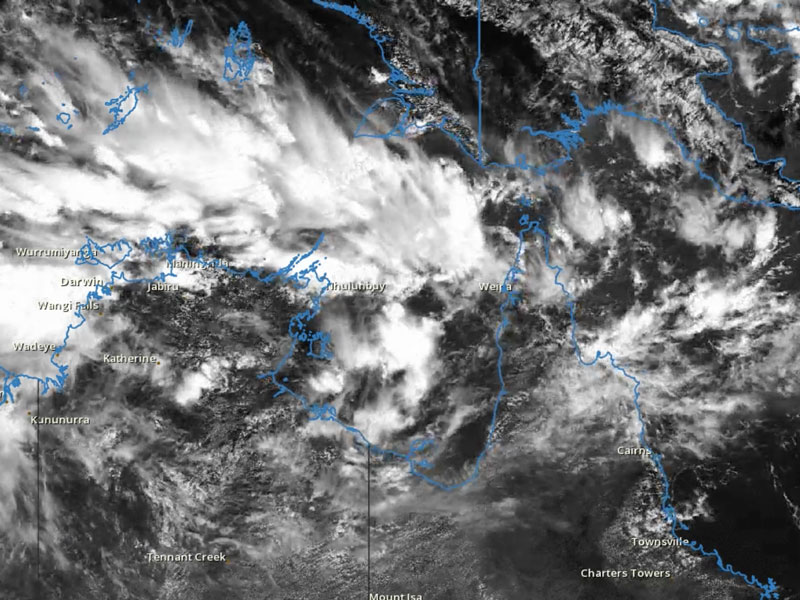 There is a 50 per cent chance that far north Queenslanders could endure their first cyclone of the season in the next few days – and authorities have warned people against forging ahead with Christmas plans that could place them in danger.

There is a high chance a cyclone will develop in the Gulf of Carpentaria on Christmas Eve and Christmas Day, but regardless of whether the storm cell materialises, heavy rains are expected, according to the Bureau of Meteorology.

A low forming in the Gulf and a monsoon trough – a weather event capable of producing entire annual rainfall totals in a short time – was strengthening and could impact communities on the western side of Cape York and southern part of the Gulf of Carpentaria over the next few days.

“With this particular one, I guess we are adding to that with the monsoon trough. Even if it doesn’t spin up into a cyclone the bureau is expecting quite a bit of rain over the next few days,” State Emergency Service far northern region regional director Wayne Coutts told The New Daily.

A cyclone system is expected to materialise on Wednesday or Thursday and bring heavy rainfall to the northern parts of the country.

The Bureau of Meteorology uses the term ‘high chance’ to describe a weather event with 50 per cent or higher chance of occuring.

On Monday evening it was still unclear exactly where any potential cyclone system might make landfall, but at this stage sparsely populated areas were the most likely to be impacted.

“It does look as though it is likely to head towards the south-east, so areas around the west and parts of Cape York Peninsula and the Gulf country, it is a little too early to say exactly where,” Bureau of Meteorology meteorologist Kev Hutchins told The New Daily.

“[We are expecting] periods of quite heavy rain with some locally heavy falls all along that northern area of the state.

“Typically once every three to four years you would get a cyclone around this time of year in the eastern region, which is the Coral Sea and the eastern parts of the Gulf of Carpentaria.

“So I suppose you could say it is it relatively early.”

With cyclone season running from November to April, Mr Hutchins said now was the time to put emergency plans in place.

“Regardless of whether or not we do see a cyclone form it is a good time for people in the northern parts of Queensland to check their cyclone plans and make sure they have everything right,” Mr Hutchins said.

On average, 4.7 cyclones impact Queensland’s weather system each year – a number that may increase in years when a La Niña weather system is present.

They can bring winds from 90kmh and up to 280kmh, which can leave a trail of destruction.

The most cyclone-prone areas include the coastal regions of Queensland, Western Australia and the Northern Territory.

The Australian Government recommended people prepare by checking their home to ensure the structure was safe and secure, clearing the property of loose items and securing them, and finding a safe place nearby to gather if necessary.

“Emergency services are probably generally a little bit concerned people think, well we only have one chance at Christmas, and might take unnecessary risks,” Mr Coutts said.

“In the lead-up to Christmas people have got plans – to go camping, to go on holidays, to see family for Christmas lunch – but have a think about what other plan you might put in place if it gets wet.”

At this time of year, he said, people often had extra food at home for Christmas festivities, which could be handy to prepare.

But one thing often overlooked was medication.

“You want to have that through the Christmas period, so if there was a scenario where the shops were closed for a few days or you weren’t able to get to the shops [you had enough],” Mr Coutts said.