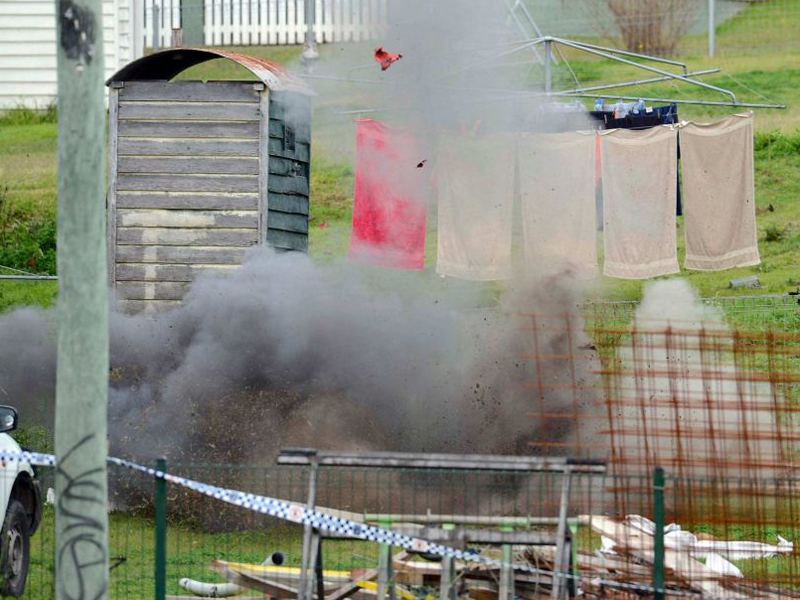 A man has been convicted of seriously maiming a 15-year-old boy in 2013 with a homemade golf ball bomb.

Glenn Charles Dell, 45, was found guilty of grievous bodily harm by an Ipswich jury, while his co-accused Mark Anthony Tear, 39, was cleared of the same charge.

The ball was found by teenagers in a gutter in Leichhardt, west of Brisbane, and local children played with it.

The court heard the teenage victim, who cannot be named for legal reasons, had no idea he was handling a bomb and thought the golf ball had instead been packed with heroin.

Before the trial began, both men pleaded guilty to leaving explosives in a home.

The pair will be sentenced in December.

Dell detonated bomb at a party

The trial was played a police recording in which Dell admitted making bombs, including one golf ball bomb.

When he and Dell were driving in Leichhardt, Dell threw it out the window but when it did not explode, they retrieved it.

“We chucked it out and it didn’t go off so we done a U-bolt and went back and picked it up,” Dell told the court.

It was only just for fun, it was just to make a bang.

Dell said he then took it to a party at Beerburrum, north of Brisbane, where he detonated it.

“It was only just for fun, it was just to make a bang.”

But two 17-year-old boys, who cannot be named, gave evidence that they found the ball in a Leichhardt street several days before it exploded.

The ball had been hollowed out and filled with up to 14 ball bearings.

It was also filled with white explosive powder known as triacetone triperoxide (TATP).

Sergeant Michael Gardiner told the court that police discovered jars of TATP at the home Dell and Tear rented together.

It was the third time police discovered TATP at the home.

Tear suffered serious injuries to his hands and legs in July 2013 when a bomb he was making exploded.