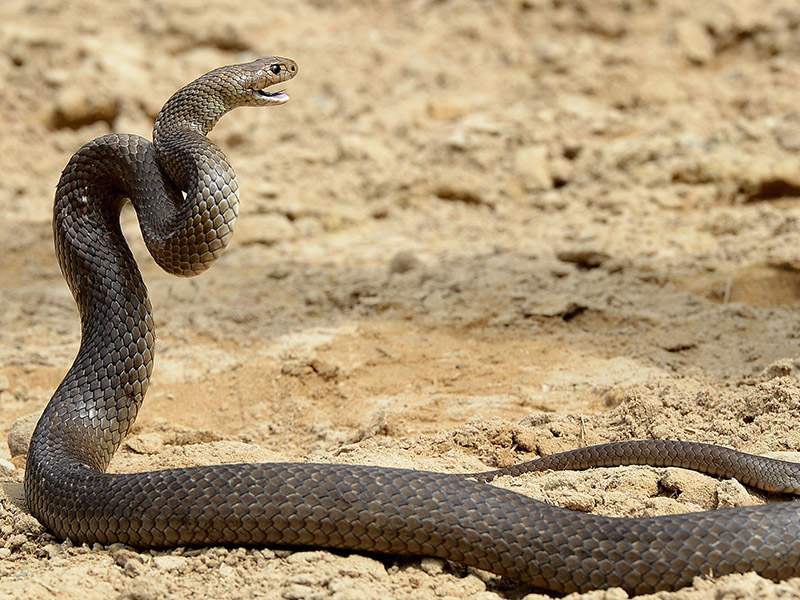 Surf lifesavers on the Gold Coast are on high alert after warnings that some of the tourist strip’s prime beaches are infested with deadly brown snakes.

In a surprise addition to their usual role of rescuing swimmers in distress or even spotting the occasional lurking shark, the lifesavers are now also watching out for the highly venomous snakes.

According to experts, the reptiles are particularly active in and around the sand dunes because of the mating season and the arrival of warmer weather.

The snake alert comes after a 31-year-old man was bitten on the leg by what is believed to have been a brown snake at Surfers Paradise beach on Wednesday.

The man was sitting in the sand dunes when bitten and stumbled to a nearby lifeguard tower for help. Senior lifeguard Scott Franzmann told the ABC that the man was “a little bit worse for wear” and was fortunate that he was able to be treated quickly.

The man was injected with anti-venom by paramedics and spent two days recovering in Gold Coast University Hospital.

Surf Life Saving Queensland (SLSQ) confirmed that its Gold Coast lifesavers were now on “heightened alert” for a problem that might come as a surprise to tourists but not local snake catchers.

The eastern brown was especially prevalent but carpet pythons and the occasional green tree snake and red-bellied black snake were also present.

The eastern brown generally bred in The Spit area where there were fewer people and plenty of isolated sand dunes. When the snake grows big enough to eat rats and mice, it tends to migrate south in search of food to beaches such as Surfers Paradise.

Mr Harrison said he had caught up to 80 eastern browns a year when previously hired by a hotel at Main Beach to tackle the problem between The Spit and Surfers Paradise.

He calculated that snakes in these numbers were moving on to the beaches every year and so was not surprised that a man had been bitten in the dunes at Surfers Paradise.

He had been warning “year after year” of the dangers snakes posed to unsuspecting beachgoers. “I’m actually surprised it’s taken this long for something like this to happen,” he said.

However, beachgoers would be quite safe if they stayed on established pathways to the beach and did not to venture into the dunes.

“People should keep out of the thick grass above the beach and if they see a snake, don’t stir it up,” he said. “They will be fine if they just leave the snake alone.”

A SLSQ spokesperson told The New Daily that surf lifesavers would work closely with the Gold Coast City Council and the Parks and Wildlife Department to “ensure maximum protection for beachgoers”.

“Lifesavers on the Gold Coast will be on heightened alert over the coming weeks and will liaise closely with beachgoers to help prevent any incidents,” the spokesperson said.

“Should any beachgoers see, or come into contact with, a snake of any kind, they are encouraged to report it immediately to the lifesavers on duty who will alert the relevant authorities.”