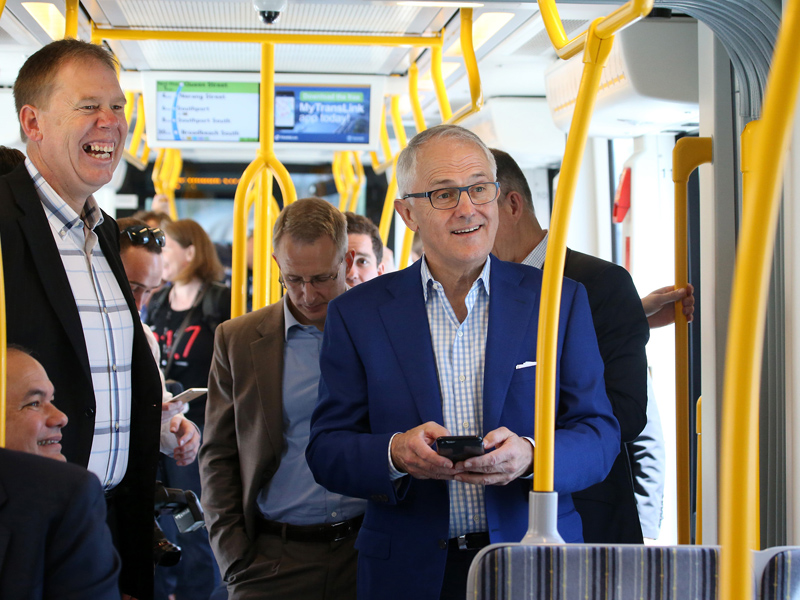 The Federal Government has agreed to back a proposed expansion of the Gold Coast Light Rail project, just two months after ousted leader Tony Abbott refused to support it.

On Sunday, Prime Minister Malcolm Turnbull said the development was a vital piece of infrastructure for Queensland, with the funding ensuring stage two of the project was ready in time for the 2018 Commonwealth Games.

However, the Turnbull government’s $95 million boost was less than a quarter of the project’s cost, which was estimated at $700 million.

“It is limited to that amount – and no more, to support the completion of this last stage to Helensvale,” Mr Turnbull said.

“It is very much a Queensland project so the construction risk is obviously with Queensland – that’s why the grant is capped.”

The Gold Coast City Council has committed $55 million to the project, leaving the bulk of the cost to the Queensland Government.

The 7.3km extension will run from the Gold Coast University Hospital at Southport to the Helensvale train station.

Mr Turnbull took a short rail trip from Southport to the Gold Coast University Hospital Station to make the announcement.

He said the project would have the financial support of three levels of government.

Mr Turnbull spoke about the importance of having the project finished for the Commonwealth Games.

“Our cities are the crucibles of innovation, of enterprise – it’s where so much of our GDP was created and it’s vital that they have the right infrastructure, whether it’s telecommunications infrastructure or transport infrastructure like this,” he said.

Mr Turnbull said the new extension would connect five competition venues and nine events to accommodation and public transport during the Commonwealth Games.

Mayor Tate replied: “They do.”

“Tom has become much fitter since he started getting the light rail,” Mr Turnbull joked.

Mr Turnbull said the project would generate more than 1000 jobs during the construction phase.

“In the future we want to look at more innovative approaches,” he said.

“We want to look at arrangements where we can partner.”