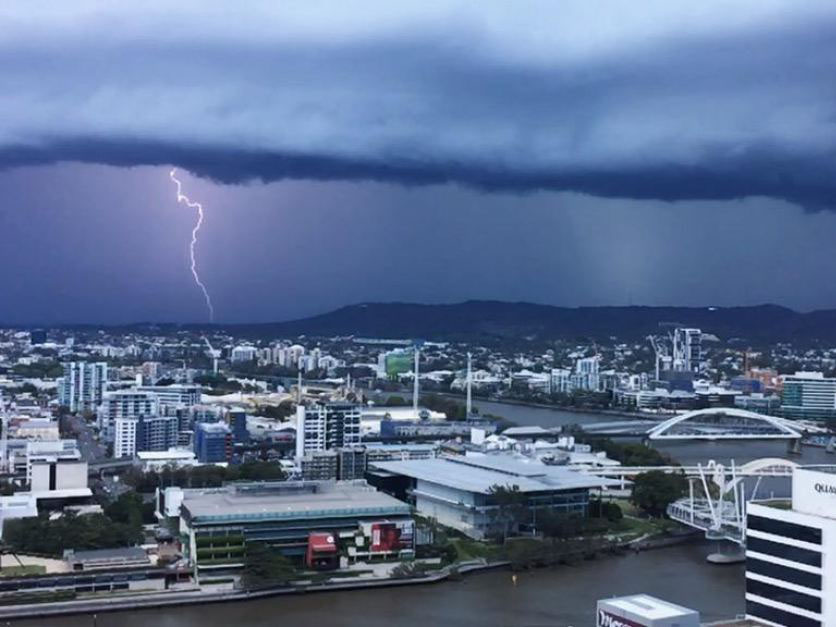 Parts of south-east Queensland were lashed by hail and more than 10,000 lightning strikes as a severe thunderstorm hit the region, bringing power outages to more than 1,000 homes and businesses.

More severe storm cells had been forecast for the south east, however the Bureau of Meteorology (BoM) cancelled its warning about 4:15pm.

“The immediate threat of severe thunderstorms has passed, however thunderstorms are still occurring in the area with small hail possible,” it said in a statement.

More than 4,500 homes lost power, mostly in Brisbane, when the severe storms hit the capital about 2:30pm and moved towards the coast.

Flights at Brisbane Airport were delayed and there were reports of road accidents at Chermside, Greenslopes and Auchenflower.

Hail fell at Esk, north-west of Brisbane, and at Kurwongbah, Morayfield and a number of Brisbane suburbs.

Energex spokeswoman Karen West told 612 ABC Brisbane about 4,400 properties were without power, the majority of them in the Brisbane area.

It may be a while before they are re-connected.

“It is really hard to say,” she said.

“We can’t send our crews out until that activity clears,” she said.

“Out further west, out near Crows Nest and in between Toowoomba and Gatton there is another line of storms out there,” he said.

Mr Hutchins and they could hit the south-east about 5:00pm.

“It usually takes a couple of hours to get from out there, the Lockyer Valley into the city,” he said.

“That’s not to say they even will make it, but if they do, it won’t be less than two hours.”

The thunderstorm comes just days after a system over Logan and Brisbane brought “golf-ball-sized hail” to Indooroopilly. Queensland Fire and Emergency Services has advised residents to:

• Move your car under cover or away from trees;

• Avoid using the telephone during a thunderstorm;

• Beware of fallen trees and powerlines; and