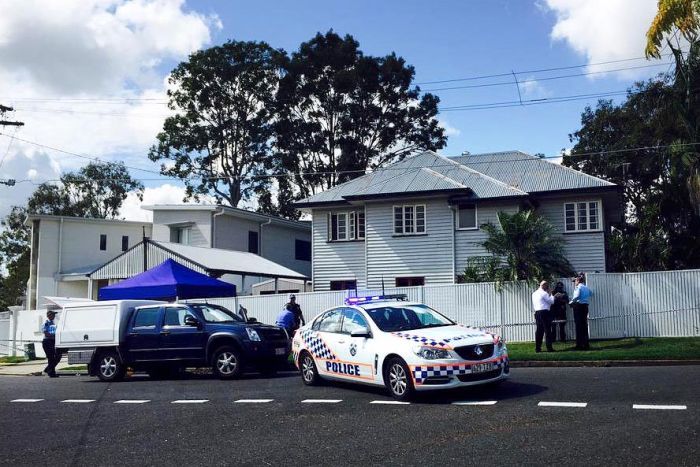 A father has been charged with the murder of his six-year-old daughter, after her body was found inside her bedroom in a house in Brisbane’s north.

The girl was found by her mother at around 8am on Monday, about three hours after police believe her 52-year-old father left the Kedron home in his Mercedes.

He was later found on the Gold Coast, taken to the Gold Coast University Hospital at about midday, and then reportedly transported to the Surfers Paradise police station late in the afternoon.

He has since been charged with one count of murder and one count of attempted murder, and will appear in the Southport Magistrates Court on Tuesday.

The mother, 36, had called for an ambulance after making the grim discovery in the bedroom that her two daughters shared.

Acting Detective Superintendent Geoff Sheldon said the girl had no obvious signs of injury and investigators were working to determine how she died.

“There’s no immediate cause of death,” he said outside the Sturt Street home.

“We’re treating the whole death as very, very serious, as you would with any death of a child of such tender years.”

The girl’s distraught mother and eight-year-old sister have been speaking with police.

“As you could imagine they are just beside themselves with grief,” Acting Det Supt Sheldon said.

There was no history of domestic violence or anything else to indicate welfare concerns, he said.

Investigators spent the day scouring the family’s home and a pathologist was among those to examine the scene.

The tragedy has shocked those in the otherwise quiet suburban street.

A woman who has lived in the street for 26 years said she heard sirens and police helicopters at 8.30am.

“I hope they get to the bottom of it.”

Another neighbour said it was difficult to believe such a tragedy had unfolded in the suburb.

“It just doesn’t happen in Kedron,” he told AAP.

Man charged with murder of daughter