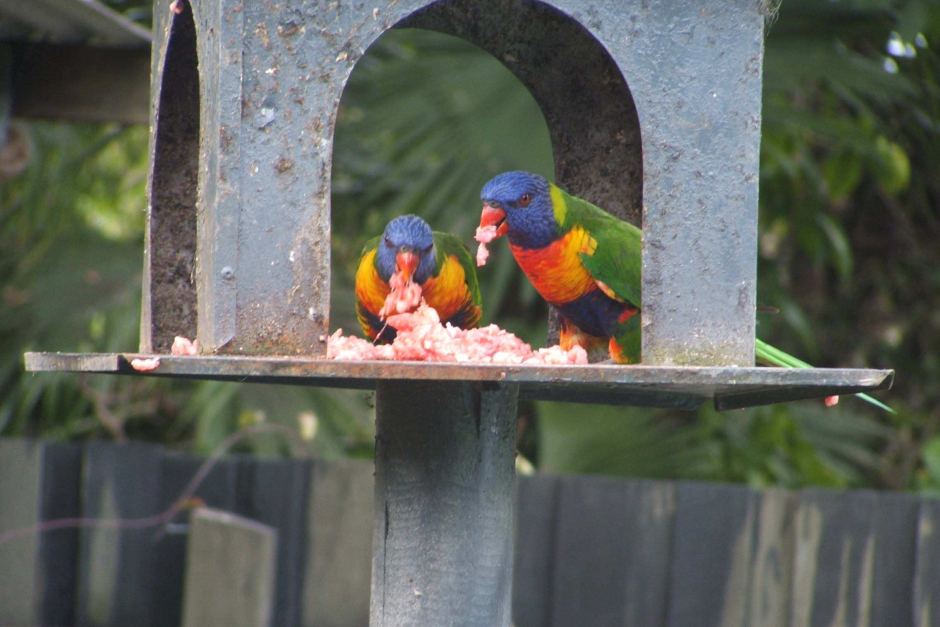 The behaviour of a population of rainbow lorikeets who frequent a backyard feeding station on a property north of Brisbane has left bird experts baffled.

The lorikeets are eating meat and Griffith University’s Professor Darryl Jones is shocked.

Professor Jones, who is researching the impact of backyard feeding on bird populations, said lorikeets usually eat nectar and pollen which they obtain from native plants and shrubs.

“I have researched what birds feed on all around the world,” Prof Jones said.

“I’m up to date with all the kinds of crazy things that birds are eating all over Australia.

“To see a lorikeet eating meat astonishes me completely. I have never heard of such a thing before.”

For years, Bill, who owns the Elimbah property, has put out pets mince for magpies, currawongs and kookaburras.

He also puts out seed for vegetarian birds like galahs, king parrots and the lorikeets.

He feeds about a dozen birds each day and knows they are spoilt for choice when it comes to food.

Bill’s property is home to native trees and shrubs, and there is untouched forest nearby.

He is happy to offer a few scoops of mince and seed to the birds that come in for a free feed.

It was about seven years ago when Bill first noticed the lorikeets eating meat, and they have been eating it ever since.

“At first they went for the seed but then they started chasing the other birds away from the meat, which surprised me,” he said.

Prof Jones said the availability of food on the property made the lorikeet’s decision to eat meat mystifying.

“It makes me wonder very strongly that these particular birds, the individuals in the picture, are probably needing some protein.

“But the birds look extremely healthy in those pictures.”

He said lorikeets always get around in pairs and tend to be nasty with other bird species when it comes to food.

He said it is not surprising that the lorikeets are chasing magpies and kookaburras away from the meat.

“What is unusual is that the food that they’re defending is actually meat,” Prof Jones said.

“That’s the strange part about it.

“Maybe the lorikeets saw what the other birds were eating and simply decided to try it and liked it.

Prof Jones believed that lorikeets eating meat had never been documented before.

“If it was a genuine idea that lorikeets would eat meat I’m sure it would’ve come up by now,” he said.

He said the lorikeet population had increased dramatically in south-east Queensland in the past decade.

What once was a common species has now become the most abundant bird in the south east.

Prof Jones said people tend to plant native, nectar-bearing plants in their gardens and local councils do the same in their parks, which provides ample food for lorikeets and other birds.

He said lorikeets are also being fed by thousands of Queenslanders in backyard feeders.

“I would very much like to know if people who put out meat for other birds are getting lorikeets coming and eating it as well,” he said.

Professor Darryl Jones would like to hear from anyone who has observed lorikeets eating meat.

He can be reached at d.jones@griffith.edu.au