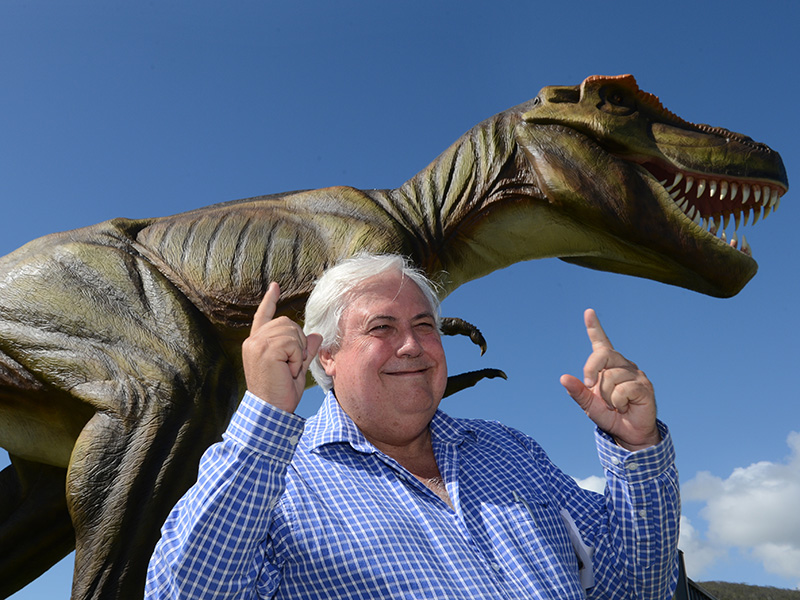 Firefighters were called to the blaze at the Coolum resort about 1:30am to find Jeff already well alight.

Police had been investigating whether the fire was started deliberately, but Mr Palmer told the ABC he did not believe arson was involved in Jeff’s demise.

“Apparently he’s had an electrical fault and burnt down,” he said.

“There was a storm through the morning and all I know is there was an electrical fault and he caught fire and that was the end of him.”

Mr Palmer said he was still deciding whether to bring in a replacement once what remained of Jeff was dismantled.

“Jeff’s brother is waiting in the dinosaur park to be liberated to take his place,” the Federal MP said.

“Question is whether we bring him out or whether we leave him where he is – he’s very happy with the other dinosaurs.

“Certainly the next birth we have of a dinosaur, we will name after Jeff.”

“There was only a small section of the tail left that was unburnt once the first appliance arrived.

“They had that fire out within a few minutes.”

The life-size T-Rex has been roaring at golfers on the ninth hole of the Palmer Coolum Resort since December 2012.

Its arrival in a prominent position on the golf course was one of several issues that prompted the PGA of Australia to move the Australian PGA Championship away from the resort.

The model’s nickname was interpreted by many as a slight on former deputy premier Jeff Seeney, following Mr Seeney’s falling out with Mr Palmer in the wake of the 2012 election, although Mr Palmer has denied this.

Who killed Jeff? Palmer’s dinosaur goes up in flames