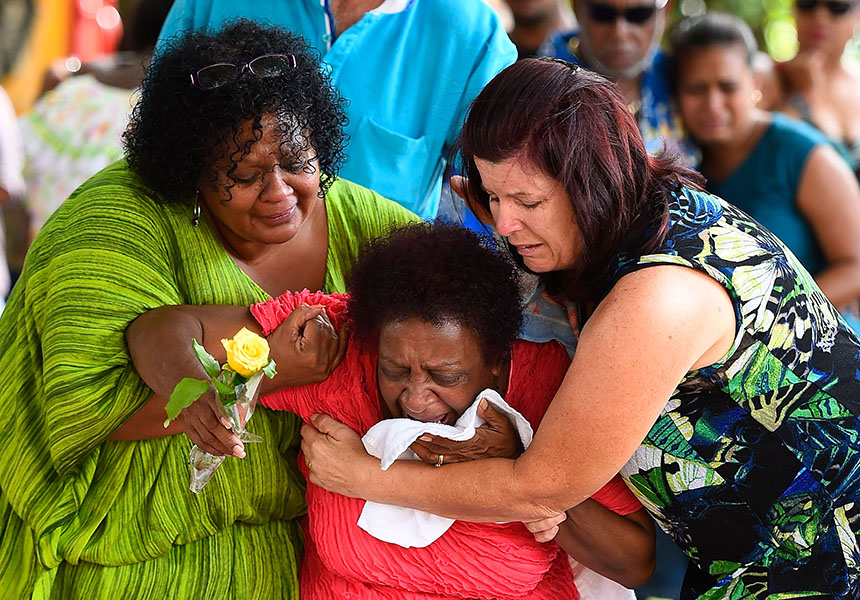 As a far north Queensland community grieves the tragic loss of eight children, it is also allowing itself to hope.

The Cairns suburb of Manoora was rocked on Friday when the bodies of four girls, aged two, 11, 12 and 14, and four boys, aged five, six, eight and nine, were found at a house on Murray St.

Mersane Warria, 37, the mother of seven of the children and aunt of the eighth, was charged with eight counts of murder in a bedside hearing at Cairns Hospital on Sunday.

Earlier in the morning, residents of Murray St and surrounding suburbs gathered at a nearby community centre for a church service to honour the children.

For many, it was also a chance to reflect on the future of Murray St, which is notorious for problems and police call-outs.

Reverend Rodney Minniecon likened the community to a mother giving birth – she had to go through pain before creating new life.

“The families are fighting one another – our family community, even family bonds are broken,” Rev Minniecon said.

“The pain of seeing what’s just happened can reunite and rekindle a fire within us that we do need one another.”

“Does anything good come out of Murray St,” Mr Mitchell asked, before sharing the story of a man who offered to work for him for free.

“There are people, the youth of the community here, who need that hope.

“We need to share those good stories, the hope brings us love to these people.”

The Torres Strait Island community in Brisbane held a special service at Inala on Sunday morning as the children were remembered in prayers at churches across the nation.

Townsville residents are invited to a candlelight vigil in Flinders Street from 6pm (AEST).

In Cairns, a meditation session is planned at Munro Martin Park from 6pm while the city’s Living Waters church is holding a memorial service at Trinity High School from 5pm.

Grief, despair and a little ray of light for Cairns